CITATION:
Traci Brynne Voyles. 2020.  Environmental History 26, no. 1, pp. 127–141.
ON-LINE AVAILABILITY:
https://doi.org/10.1093/envhis/emaa076r
ABSTRACT:
In 2018, two military aircraft flew over the Salton Sea, California’s largest inland body of water occupying the desert area of Imperial and Riverside Counties. Midair, the pilots decided to pull a prank: they used their planes to draw “a sky penis” as revealed in the radar image of their flight path. In this essay, I situate the sky penis prank in a larger historical context: one in which white settlers in this part of California have made meaning out of the Salton Sea as a body of water that is only valuable insomuch as it supports white masculine sexual vitality. This masculine vitality, in turn, has entailed devastating environmental consequences with impacts on nonhuman nature and people alike. Through this lens, the image of the sky penis can be understood as an imbrication of the sexual politics of environmental degradation.

This post comments on the article that was the basis for a talk Voyles presented; here is the video. She did a post providing some background on the Salton Sea; click here to view. This set of three posts lead off our current series on Environmental Justice and Environmental Health.

These Violent Delights: The Epic Origins of a Patriarchal Seasickness 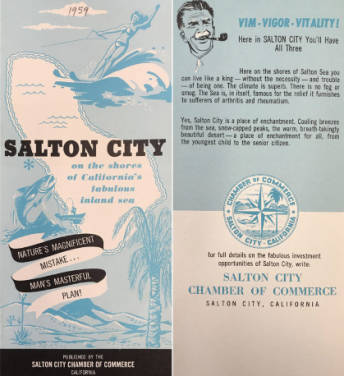 Traci Brynne Voyles’s essay “Toxic Masculinity: California’s Salton Sea and the Environmental Consequences of Manliness” reflects on gender politics at the Salton Sea, an artificial lake in southeast California. Much of her supporting evidence is visual, for instance a brochure circulated by the Salton City Chamber of Commerce in 1959 to promote settlement in and visitation to the area that depicts a bikini-clad water-skier, a fisherman making a catch, and the head of a pipe-smoking, heavily mustached man beside the slogan “Vim-Vigor-Vitality!” Roughly contemporaneous photographs made by the Sandia Corporation show male scientists at the Salton Sea Test Base, men who dropped thousands of real and dummy bombs in or around the lake, bringing their technocratic gazes to bear on their surroundings in their efforts to bend nature to their will. 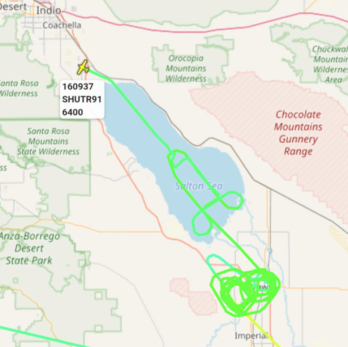 The lake signifies in these ways of looking alternately as a place for manly recreation and as a sounding board for male fantasies of warring violence and scientific control—both of which are also ingredients of colonial conquest or settler occupation and of environmental hazard. Voyles begins and ends with discussion of another, more recent image that combines all of this, a kind of contemporary successor to the midcentury Americana of steely machismo, warrior courage, and nerdy tech that preoccupy her in the essay, and it reveals how these earlier images of settler-colonial masculinity persist into a present marked by ecological crisis: a 2018 radar image of a penis “drawn” in the sky by way of military aircraft. 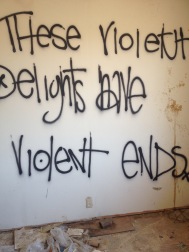 As an art historian with an abiding interest in language, I am best equipped to respond to Voyles’s argument that the Salton Sea has figured as a kind of playground or proving ground for toxic masculinity by thinking about how representation works there. I will start with a graffito I photographed in an abandoned house in Bombay Beach, a town that was once, like Salton City, promoted as a site for pleasurable recreation but that now draws disaster tourists: those attracted to hellscapes like the post-apocalypse of cheap thrill in ruins. The phrase “These violent delights have violent ends,” has its origins in Shakespeare’s Romeo and Juliet, where the line foreshadows the lovers’ deaths.

I’d like to use this scrawled missive about pleasure and result to point less at what Voyles calls “the environmental consequences of manliness,” which are tragic like the play from which our tagger quotes, and more at that manliness’s cause or origin. I’ll pivot toward the violent delights that precipitate these violent ends via the actions of men who have used and abused the Salton Sea, by examining a 1911 novel adapted for the screen in 1926. Both book and film are titled The Winning of Barbara Worth, the former written by Harold Bell Wright and the latter directed by Henry King. Rather than tragedy, they hew toward another genre altogether: epic.

Wright’s novel and King’s film both relate the same narrative about Barbara Worth, orphaned when her settler parents perish during a trans-desert wagon journey, whereupon she is adopted by Jefferson Worth, who dreams of irrigating the Colorado Desert of southeastern California. As an adult, Worth finds herself torn between Willard Holmes, an engineer set on fulfilling her adopted father’s plan, and local cowboy Abe Lee. Each fights for her affections, the former representing modern industry and the latter figuring an older, rural way of western life. Holmes becomes a local hero after recognizing that his miserly employer’s refusal to reinforce his own water infrastructure imperils the region, and both narratives climax with a town-destroying flood that creates a new lake. Holmes, winning over Barbara Worth’s affection by saving lives, ultimately restores the river to its proper course, leaving behind an irrigated desert paradise, the arid and inhospitable wasteland thus transformed into beautiful and profitable farmland—a “happy” ending. 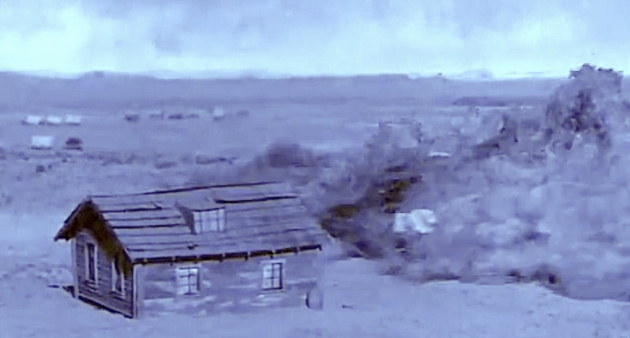 An apologist for settler colonialism who minimizes Indigenous presence and care for land that is anything but waste, as well as an apologist for limitless economic growth who assumes the benevolence of capitalist agribusiness, Wright also deploys rhetoric that militarizes and masculinizes his characters’ effort to make the desert bloom. For instance, Chapter XXXIV, titled “Battling with the River,” begins with these words:

Some day, perhaps, the history of that River war will be written. It can only be suggested in my story.
It was a war of terrific forces waged for a great cause by men as brave as any who ever fought with weapons that kill. (p. 460)

Imbuing an engineering project with the aspect of war, Wright conflates technological ingenuity with manly battlefield glory, their twinned pursuit ultimately achieving a double victory by also settling the score between Holmes and Lee for possession of Barbara Worth. In Wright’s story, “winning” her stands for gaining the “worth” (as she is named) unlocked by irrigating the recently settled desert. 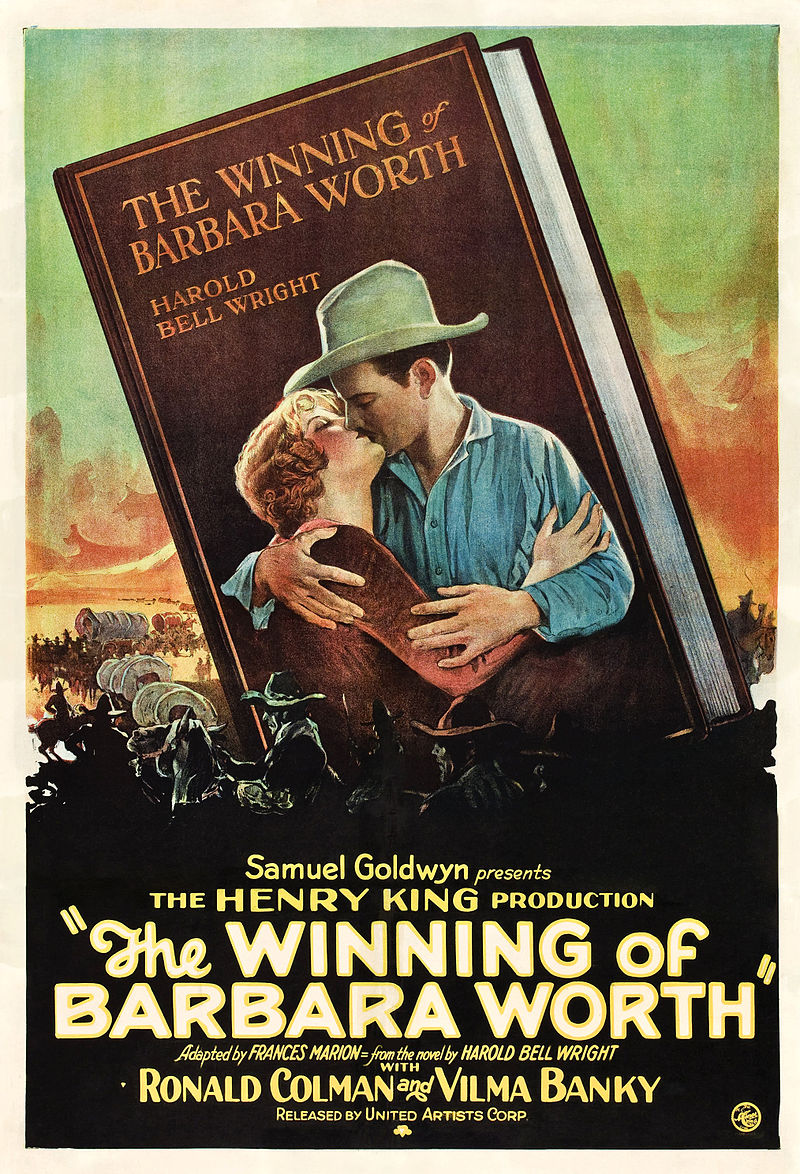 Wright is not well known today, but he was among the bestselling authors of his time and, moreover, he lived in El Centro, California, just south of the Salton Sea, so he was both widely influential and knew of what he wrote. King’s film, made fifteen years after Wright published his novel, also has a real connection to the place itself, as it was shot largely on location in the desert there. This matters less for the sake of cinematic realism than for the real effects (or reality-warping effects) that issue from how The Winning of Barbara Worth, as both literature and film, interweaves a fictional story of a man’s victory over a woman’s heart with a fictionalized account of the manly conquest of natural forces.

In keeping with the epic genre, the story both book and film tell is connected to a real place, but conceals some of that place’s history. For instance, the Salton Sea’s creation, preceded by decades of preparation before its appearance in 1905, involves things that are hardly “manly”:

These things appear in The Winning of Barbara Worth not in their historical actuality but condensed into the villainous character of Holmes’s employer, who is a “bad” man and thus a foil for Holmes’s “goodness.” In other words, the Salton Sea’s epic does its genre’s typical work of providing civilization with an origin story that is inevitably oriented around good heroic male triumph over an opponent—and over both nature and women. In the cultural understanding, that story occludes other stories by figuring as an obfuscating representation of origins. In addition to the duplicitous history of the lake’s creation, another lost story here is, of course, the dispossession of Indigenous people, especially Cahuilla and Kumeyaay people, whose land was stolen, though this theft got disregarded in representation. Such narrative maneuvering serves further to legitimize the sort of settler colonialism that the lake was itself already made to justify.

Let’s return, then, to the sky penis with these thoughts about the function of epic as an origin-effacing way of seeing in mind. Here is an image to which reality can aspire but never accord—not because the image is a mismatch, in this instance larger than any possible referent, but because it traces and thus reveals how it echoes the underlying and originating shape and orientation of the Salton Sea below, which guided the pilot’s hand to scrawl not only a northwesterly phallus but also a torrent of fluid (simultaneously legible as germination and waste) emanating from it. A revelation: the Salton Sea was, in a sense, always already a kind of sky penis, a representation of masculine fantasy, unreal but therefore all-too-reality-inducing. Produced by a gush of liquid, it is both the wasteful consequence of that flow and a germinal point of departure for repetitions of its basic gesture: delight leading to ends with the possibility of feeling guilt about that process assuaged through recourse to the epic mode’s obfuscations.

Seeing this opens our eyes to other things about the media and style of the Salton Sea’s manly visual culture and its infatuation with epic. To start, the smoking mustachioed cad in the brochure is drawn, which is to say that he is the product of imagination; the immediate realities he traces are not an actually existing person so much as the moves of a draftsperson’s hand constructing an idealization. Moreover, the men of science—gazing at the world so as to control it—view representations revealed by their instruments, which were made to show them reality as they wanted to see it, which is to say bereft of their own desires and, instead, “objectively” perceivable according to standards of scientific measurement.

Epic suffuses these images and ways of seeing, as it suffuses the lake itself, with origin-obfuscating representations of origins. The Salton Sea is itself just as cleverly crafted a product of human artistry, and it does the same kind of work these images do by representing while also concealing the violent delights of its own creation—and only those who know how to see tragically can see this. As we know from Voyles’s trenchant analysis, the real ends of epic oversight, perpetuated through further epic mimesis like the sky penis, are not sealed up with the genre’s obfuscations but cascade outward every bit as tragically—and often as violently—as the fate of the star-cross’d lovers in fair Verona.

Can such mimetic loops, which disingenuously disavow and thus invite repetitions of their violence, be broken more often—as the graffito’s sharp distinction between delights and ends does—to facilitate more sensitivity, care, and even healing? Here, it is worth bearing in mind that the Marines piloting the T-34C who drew the sky penis claimed to be unaware that their flight path could be tracked—proof that displays of vim, vigor, and vitality are also, however paradoxical it may seem, displays of impotence. In the end, when toxic masculinity seeks cover after exposing itself, its excuses—sincere or feigned—cannot mask the extent to which, caught up in loops, it cannot help itself. Much comes to depend, finally, on what gets made of toxic masculinity’s powerlessness over its own brutality’s guileless predictability.

2 thoughts on ““Toxic Masculinuty: California’s Salton Sea and the Environmental Consequences of Manliness””