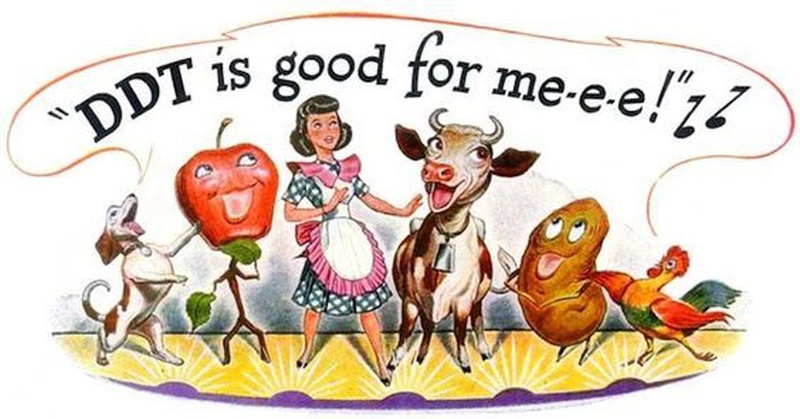 [We welcome Jennifer A. Ross to the blog, to continue our series on Environmental Justice and Environmental Health. The video of her talk in the associated speaker series will available next week.]

People have a long and complicated relationship with pesticides. It starts with us defining what a pest is, and then seeking a way to be free of them.  Any organism can be a pest—if it is potentially destructive, harmful, or bothersome, and lives somewhere we do not want it to be.  Pests may be problematic because they may destroy crops, they may be vectors for disease, they may do damage to structures, they may bite or sting, or make us think our homes are not clean.  This is subjective, and different people have different thresholds for when they will reach for a pesticide to be rid of a pest.

Pesticide is a very general term that encompasses any sort of chemical mixtures we use to kill, repel, or prevent the encroachment of pests.  This term can include antimicrobials, attractants, biocides, disinfectants, fumigants, fungicides, herbicides, insecticides, microbial pesticides, miticides, and repellants—not an exhaustive list.  None of these kills only the target pest while remaining nontoxic to people and safely degrading in the environment—there are no perfect pesticides. Still, we continue to need them to feed the world and combat disease.

Chrysanthemum cinerariaefolium, used in ancient times as an insecticide

Human beings have used pesticides for thousands of years.  First, we used them in agriculture, and we still do, to make sure we have crop yields high enough to feed people.   Sumerians used sulfur-based pesticides over 4000 years ago.  Over 3000 years ago Chinese healers discovered substances to remove head lice. The ancient Greeks and Romans used various smokes to rid structures of pests. The Roman military went so far as to drain swamps to stop malaria, even when they did not know it was due to mosquitoes carrying plasmodium. Chrysanthemum plants have been used as insecticides for 2000 years, before we knew how to make the pyrethrum and pyrethroid synthetics in use today.  1800’s agriculture in the US used arsenicals, and certain arsenicals have been used until very recently in some chicken farming.  This is one of the reasons so much of the US southeastern region has arsenic in the soils.  Most recently, in the late 1930s and early 1940s chemists discovered and learned to synthesize the volatile organic compounds (VOCs) that are used in today’s pesticides.

Organochlorines (OCs) were very broadly used for many years in the US and abroad because they remain the most effective against malaria vectors.  However, pests gain resistance to pesticides—some survive when a given amount of the chemicals are applied and pass their resistance-conferring genes on to their offspring.  This means that going forward, more and more pesticide is needed to be effective.

But as we continued to spray more and more concentrated DDT, for example, we began to learn about the persistent nature of OCs.  OC pesticides are persistent organic pollutants (POPs) and remain in the environment for years after they are used.  OC pesticides bioaccumulate in organisms, concentrating the amount of pesticide in each higher level of consumer in a food web, and remain stored in fatty tissues. Rachel Carson’s celebrated work, Silent Spring, vividly laid out how our indiscriminate use of OC pesticides led to very serious environmental problems.  Within ten years of her book, we went from ads declaring “DDT is good for me” to banning the use (though not the production) of DDT in the US.  By the 1980s, very few OC pesticides were in use here.  However, we can still find DDE, a breakdown product of DDT, in soils everywhere, and due to global distillation (where POPs sprayed in one area evaporate and move towards the poles, to be condensed in cooler climates) we find DDT in people and animals in the Arctic circle, where these pesticides have never been sprayed. Accumulation (and the health effects due to accumulation, potentially passed to children) is happening in people who never benefitted from the use of these compounds.

While OCs are persistent in the environment, the other three classes of insecticides do not persist very long in sunlight or water, and do not bioaccumulate.  However, all 4 classes of insecticide are neurotoxic, and organophosphates (OPs), which replaced OCs, have higher acute neurotoxicity. OPs were widely used in the 1980s through the early 2000s, before falling out of favor to pyrethroids and then carbamates. Some OPs are still in use.  Sadly, OPs are the ones that get the most news.  Every time there is a nerve gas tragedy with Sarin or more recently Alexei Nalvalny’s poisoning with Novichok, we see extreme examples of the acute toxicity of strong OPs.

In 2016-2017 there was a great deal of controversy about the OP insecticide Chlorpyrifos.  Chlorpyrifos is used on soybeans, corn, cotton, nuts, and other row crops in the US. There are many studies demonstrating its danger, including EPA-funded work showing that it has caused detrimental health effects in children, and is particularly risky to children under 6.  In 2016 the EPA finalized a review of the a risk assessment and many expected a ban of chlorpyrifos was forthcoming. But in March of 2017 no changes were made.  The agricultural community considered this a relief and excellent news, while some children’s and environmental advocacy groups were stunned and angry.  Discussion over the use of chlorpyrifos is ongoing at the EPA.

In the early 2000’s, we moved from OPs to less toxic pyrethroids. Since then most pesticide use has centered on pyrethroids, and even more recently on carbamates.  Pyrethroids are synthetic insecticides that are derived from naturally occurring pyrethrums.  Some pyrethroids—the ones that are naturally occurring—are used in organic farming.  These pyrethrums approved for use on organic crops are no less toxic, but we have a bias that natural is better.

It is important to mention here that organic foods are not and never have been pesticide free, nor are the pesticides used in organic farming any better for people.  The “organic” designation also does not consider neighboring farms, run-off, transportation, or what is used in packaging and at store locations.  I, along with many who study toxicology and biochemistry, consider organic food a virtue- and class-signal, and not related to actual health effects or environmental sustainability.  In fact, if we moved to fully organic farming methods, we would produce less food and make what we have more expensive. This would exacerbate the problems we already have in making sure produce is available in poorer communities. In addition, the mixed messages of “eat more servings of fresh produce, but only organic produce,” is confusing to people on strict budgets.

Pyrethroids are neurotoxic through a different mechanism than OPs, one that is not as strong.  This is a mixed blessing.  Since pyrethroids are not as toxic as OPs, they are also less successful in killing insects, and are thus often used in mixtures with OPs, carbamates, or other chemicals called “synergists” to increase their efficacy.  Carbamates have the same toxicity mechanism as OPs, but like pyrethroids are not as strong, again leading them to be used in mixtures with synergists.  Mixtures of pyrethroids with OPs or carbamates means that multiple toxicity mechanisms are employed, and that can increase the neurotoxic effects of both types of insecticide (1, 2).  Synergists increase the toxicity of the mixture making the mixture more effective against insects, but potentially more harmful to humans.

What kinds of health effects do these insecticides cause? It depends on how and for how long you are exposed, and your age and genetics. OCs cause liver toxicity and are suspected to be endocrine disrupters.  Some articles have postulated that anyone born before 1973 would have been exposed to OCs through breast milk, and may be at increased risk for breast cancer (3).  However, these health effects are more pronounced for people with higher doses of the pesticide (for example, breast fed children of women agriculture workers).  OPs have well-known effects from acute exposure, but the long-term chronic exposures are less well known. Chronic OP exposure has been associated with depression, impaired memory, non-Hodgkin’s lymphoma, infertility, Alzheimer’s Disease, and Parkinsonism (4,5,6).

Pyrethroids in run-off from farms can kill fish

There have been excellent cohort studies (like the CHAMACOS study in the Salinas Valley of California) that have looked at the effects of exposure in utero and childhood. These studies have linked in utero OP exposures (for mothers working in agriculture) to birth defects, IQ deficit, and other neurophysiological issues (7).  Pyrethroids also have known acute effects, but less well understood chronic effects. Pyrethroids may be estrogen mimics and might disrupt our circadian rhythm.  Animal studies of pyrethroids show damage to the liver, immune system, and nervous system (8). In addition, pyrethroids are highly toxic to fish and crustaceans, making agricultural run-off a serious ecological concern.

Most of us are exposed to insecticides from the food we eat and not through living next to or working in agricultural fields (9,10). The health effects listed above have largely been studied in occupational settings, not in typical exposure patterns. This makes it far more difficult to know how much exposure people are likely to have and to study non-occupational chronic pesticide intake and the health effects that result from this type of exposure.  In my upcoming talk I will discuss some approaches taken to measure these exposures, some of the problems found in studying the question, and the importance of community involvement in research.

Jennifer A. Ross is assistant professor and Coordinator of Public and Community Health Programs, Norman Campus for the University of Oklahoma.

2 thoughts on “Pesticides and People”