This past June, I gave a talk at the Art in the Anthropocene conference at Trinity College Dublin and used the always-happy occasion of being in Ireland to visit a few places there that I had not previously visited. Among them were the National Museum of Ireland in Dublin, where I saw four bog bodies, products of ritual killings that were extracted from bogs in the interior of the country, and the archaeological site Céide Fields, a complex of fields, houses, and tombs along the Atlantic coast in County Mayo, which is now submerged beneath a bog and only partially excavated. Not setting out to become intrigued by bogs, I nevertheless did.

I learned, for instance, that the blanket bog covering Céide Fields is anthropogenic, a result of deforestation performed by Neolithic people who practiced settled farming and animal husbandry on the cleared land, but that the bog bodies were interred in raised bogs that have glacial rather than human origins. Still, at both sites, human activities such as agriculture or sacrifice and natural processes of decay and preservation take place in plainly reciprocal ways, and this got me to thinking about the relationship of the arts that human beings practice to the nature from which they issue and that they affect.

Specifically, I got to thinking about how, in the aftermath of human intervention, be it the clearing of trees or the discarding of a corpse, nature takes over, in the one case burying the stone walls of Céide Fields beneath incrementally accumulating bog, and, in the other case, preserving the victims of Iron Age killings, whose bodies endure while those of their killers do not. In this taking over, nature does to our arts what we usually assume those arts do to nature: it harnesses them and gives them shape. Accordingly, when nature takes over our arts, it reminds us that it provides the conditions from which those arts emerge in the first instance. I found myself wondering what to make of all of this, art-historically. 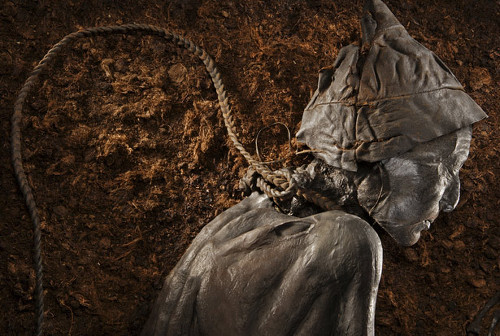 The “Tollund Man,” thought to have been the victim of ritual sacrifice.

As an art historian, bogs are not my usual subject matter. Neither are agriculture or ritual killings. That being as it may, the extent to which all of nature’s processes involving this Earth reveal the imprint of humanity’s arts is becoming increasingly clear. “Arts” is meant here in the broad sense that would include the art of tree clearing or the art of strangulation alongside the arts of painting or sculpture. And the sort of anthropogenic bogs found atop Céide Fields or the bodies extracted from glacially-formed bogs would occupy the place usually reserved in an art historian’s attention for works of art. Like works of art, both bogs and bodies are what I call meaningfully formed matter, so they can be analyzed through recourse to art-historical methods.
As even a cursory examination of places like Céide Fields would immediately suggest, there is enough evidence of an imbroglio involving people and land to begin asking new kinds of questions about both arts and nature. Nature afforded the Neolithic settlers of Ireland with the materials and mindsets to clear trees, while the production of bog bodies beginning a few thousand years later may have involved fertility rites of some kind, as scholars have traditionally held, or, according to the display at the NMI, the definition of a new king’s sovereign realm. Regardless, in all cases, human artistry harnesses — or endeavors to harness — natural processes, but that artistry is also guided by what nature affords, and once the artful action is performed, nature takes over, continuing the meaningful transformation of matter. Might it be possible, then, both to speak of “nature’s arts,” previously something of a contradiction, and to analyze them art-historically?

“Nature’s arts” might preliminarily be defined as those ways in which natural processes carry forth the transformative acts visited upon them by human beings practicing arts, which is to say the ways that human artfulness or products thereof get “naturalized” as they get absorbed into broader webs of other transformative processes that also, like arts practiced by people, have cascading effects in time. When nature makes our arts its own, it turns, for instance, deforestation into an occasion for the leeching of iron and the accumulation of decomposing grasses — the two processes that make a blanket bog what it is. Or it preserves a body cast into it in an oxygen-poor environment. Of course, our arts also issued from nature originally, so we might say that, rather than being harnessed by nature, our arts return to it if they ever left it at all. It is, then, entirely thinkable that non-humans, even non-living things, also practice arts, whether through us or not.

Regardless, nature is thoroughly marked by the arts, and the arts are thoroughly structured by nature. Consequently, we might think of arts along lines similar to the way that Walter Benjamin thinks of language in his 1916 essay “On Language as Such and the Language of Man.” Benjamin writes, “There is no event or thing in either animate or inanimate nature that does not in some way partake of language, for it is in the nature of all to communicate their mental meanings” “Of Arts as Such and the Arts of People” might be a good framework in which to begin locating “nature’s arts,” which could be defined as what submits to a conception of art-historical analysis expanded to analyze any and all meaningfully formed matter.

But I’ve no spade to follow men like them.
Between my finger and my thumb
The squat pen rests.
I’ll dig with it.

The first poem in Seamus Heaney’s first collection, a poem called “Digging,” reflects on the act (or, we might say, the art) of digging turf, a practice that is central to Irish country identity. It involves extracting peat from the ground and then drying it to be burned as a fossil fuel (and thus, when burned, a contributor to climate change as it releases carbon into the atmosphere).

Though they primarily involve human practices, Heaney’s words here are helpful for sorting out what nature’s arts are. Heaney contrasts turf digging to his own art of writing poetry and suggests that, like his father and grandfather before him, he too “digs” into the Irish soil — only his implement is not the spade but the pen. Here, the act of digging becomes poetic, as Heaney, at the outset of his career, envisions himself as the metaphorically turf-cutting poet who will find in the soil the warming energy that people need to persist, only his product will not be fuel but verse.

If we can read Heaney’s poetry as the metaphorical equivalent of cut turf, made through poetic processes that are only possible because of the literal practice of turf cutting, which meets an entirely natural need for energy, then we can also read the bog from which that turf is cut as a set of processes that exist as they do only because glaciers or agriculture and their characteristic modes of artistry took place when and where they did. The bog does not literally produce art with a pen, per se, but it carries forth, sustains, or preserves the transformations characteristic of human beings and other natural forces in other modes just as those glaciers or humans responsible for making bogs were carrying forward in other modes ways of transforming the land that they did not themselves invent from whole cloth but sourced at least partially from elsewhere in nature. The glacier or the tree-cutter, via the bog, “writes” — through Heaney’s pen — to make energy available.

Later, Heaney would reflect, in poems such as “The Tollund Man,” on bog bodies pulled from the earth throughout northern Europe by turf cutters like his own forebears, who found them as accidentally as the blanket bogs of western Ireland were made. His interest in this theme came from reading P. V. Glob’s 1965 book The Bog People: Iron Age Man Preserved, which provides a comprehensive, if subsequently emended, account of these sacrificial victims. (The Tollund Man, found in Glob’s native Denmark in 1950, provided the impetus to his book and is the subject of its first chapter.)

Neither Heaney’s 1972 poem nor Glob’s study (which appeared in English in 1969, published by Heaney’s own publisher, Faber and Faber) could exist without glacial action having performed its arts. Their poetry and scholarship are somewhat untraceable traces of these glaciers, and, like the Neolithic deforesters and Iron Age practitioners of sacrifice, they further transform what the glaciers and all that came after them transformed. So Heaney’s poem and Glob’s book are consequences of glacial retreat, and they, along with deforestation and ritual killing, are bound up together, nowhere more so than in the peculiar temporalities of disappearance, decomposition, making, and thinking, none entirely fulfilled, that enable the vanished glacier to remain palpable through its absence, the peat in the bog never to decay fully, the poem to remain open to interpretation, and the thought to remain subject to revision. All forestall the end, keep open the process, let descendants live on the energy of ancestors, and enable the arts to go on transforming. They also disclose a vast realm of untapped art-historical potential.

4 thoughts on “Nature’s Arts: Of People and Bogs”