I am currently in China as I start to write this.  A student who was accompanying me as I visited a University brought up a name that I was not familiar with, Yuan Longping, who developed a strain of rice that significantly increased the yield of rice.   I was more familiar with Norman Borlaug, who, according to Wikipedia “Borlaug was often called “the father of the Green Revolution,” and is credited with saving over a billion people worldwide from starvation.”   These two, and others, have delivered us from the predictions of Thomas Malthus (an 18th century scholar, who I remember debating about in high school) who basically said that better food production leads to overpopulation which in turn leads to starvation, i.e. the “Malthusian trap”.   Malthus was not wrong precisely, but what he didn’t foresee was the incredible improvements in yield.   Overall, to produce the same amount of food requires 1/3 the amount of land that was required 50 years ago.   I personally believe this improvement in yield was the most important advancement of the latter half of the 20th century.[1]

The graph below shows the number of people that have died due to famine since 1860.  In this graph, a huge drop occurs after 1970.   Along with improvements in crop yield, the rise of plastics took place over this same time period.   Crops must not only be grown; crops must be sent to places where people live.  The question that I set out to explore in this post was how much, if any, did plastics play in the chart below. 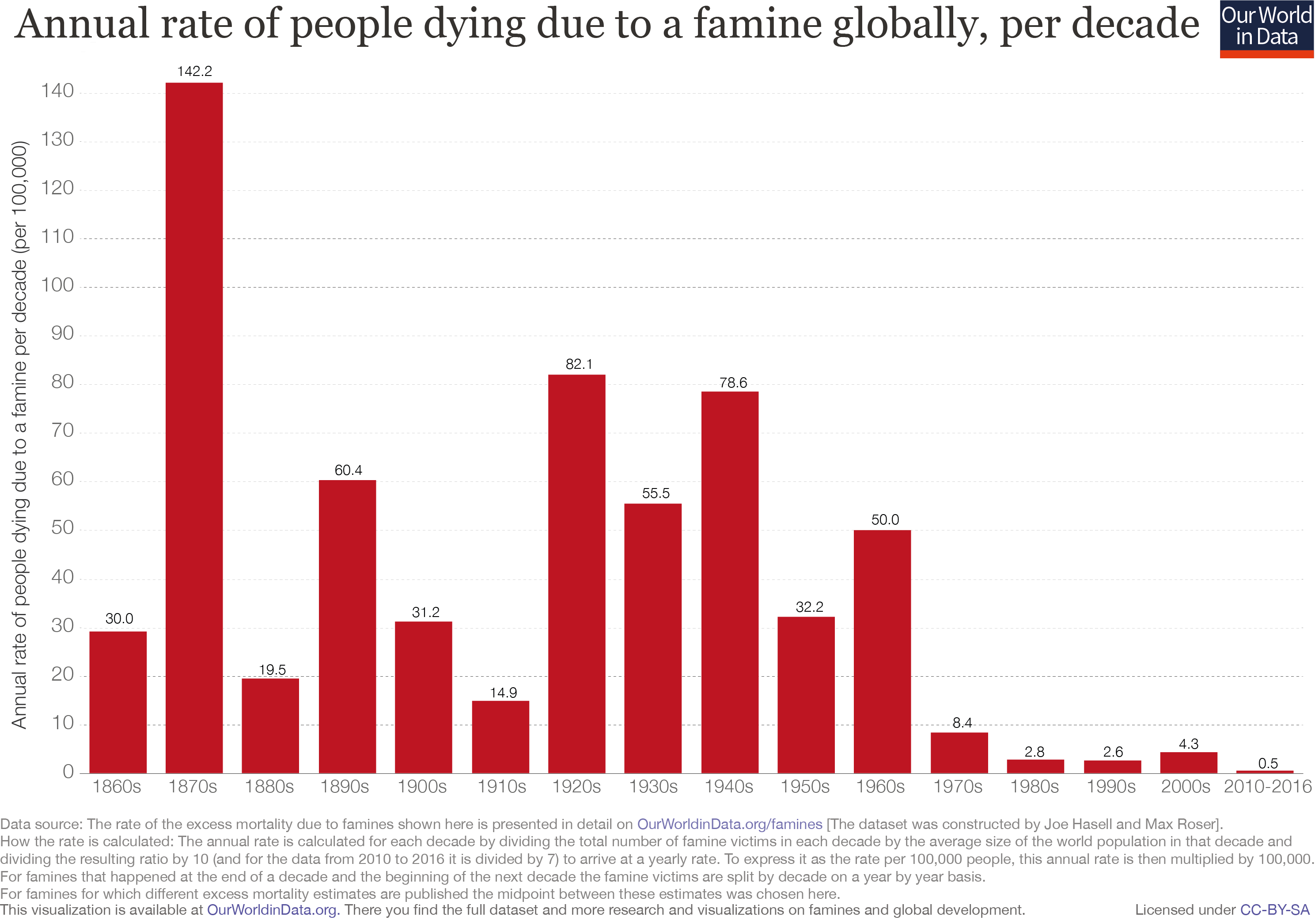 After a great deal of research, I am pretty certain that plastics don’t help prevent starvation, which is not what I thought when I started this post.  I can find no convincing argument with evidence to support the claim that plastics reduce starvation.  However, plastics do definitely impact how food goes from the farm to the table.

The most common statement on this topic is that plastics help reduce food waste.   I will explore that statement.   About 1/3 of all food is wasted worldwide.   Without question, many perishable foods wrapped in plastic last much longer than if not wrapped in plastic.  For example, potato waste is cut by 2/3; beef increases its shelf life from 2 days to 2 weeks,  (as well as being better preserved in a freezer) and wrapping cucumbers in plastic means that their shelf life is extended by a factor of three.   Further, the environmental impact of food waste is much greater than properly disposed-of plastic.  Studies have shown that  food waste has about 10 times the environmental impact (due to production and transport of food) vs. plastic packaging.

Without plastics, we would only be able to eat fresh meat that was butchered locally within a pretty short time after butchering, and many fresh fruits and vegetables could only be eaten near where they were picked.   In other words, canning of fruits and vegetables would increase in importance (and canning has significant negative environmental impacts) and local butchers would be a growth industry.

Plastics likely do not reduce food waste however, as far as I can tell; extending shelf-life is not the same as reducing food waste.  In fact, per capita food waste is much worse in those countries that have more plastic.  According to the U.N.’s Food and Agriculture Organization, “per capita food waste by consumers in Europe and North America is 95-115 kg/year, while this figure in Sub-Saharan Africa and South/Southeast Asia is only 6-11 kg/year.”    I can see two possible reasons for this disparity.  1) Plastics allows us to switch diets from non-perishable items to perishable items, which in turn could lead to more food waste.   2)  The relative cost of food waste is higher in poorer countries so the economic disincentive to waste food is higher.

These facts tend to suggest that the economic argument, i.e. (2), is the most important.   Meat is one of the most important perishable food items, and how could food waste double without meat production doubling?  In other words, these facts suggest that a switch from non-perishable items to perishable items has not occurred and hence could not be driving the increase in food waste.  This argument is not 100% conclusive since fruits and vegetables are not included, but it is hard to see how fruits and vegetables could make up the volumes required.    I think this argument strongly suggests that food waste is primarily driven by the fact that people with means throw away more food waste than people without means.

[2] One could argue that plastics engenders a “throw-away” mentality which leads to more food waste; I tend to discount those arguments personally and trust economic arguments.

2 thoughts on “Plastics and Food Transport”