Burying victims of the Black Death

The COVID-19 spring, and now summer, of 2020 has kept me thinking about something with which I have been preoccupied for about a year now: the fresco series by Ambrogio Lorenzetti known as the Allegory of Good and Bad Government, painted in 1338-39 in the council chamber in the Palazzo Pubblico in Siena. Last fall I did two posts aimed at interpreting the work in terms of the niche construction concept I (and others) have explored on this blog. But the onset of the pandemic brought me back to the work, to consider ways it might—or might not—speak to our present moment. 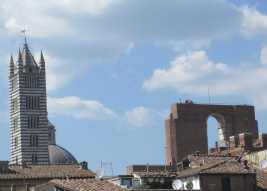 The second of my posts appeared in mid-December, shortly before the initial reports appeared of a new infectious disease, and well before the pandemic took hold. But the relevance of the emerging situation to the frescos was in fact prefigured by a specter that haunts anyone who sees them: the plague that shattered Siena in 1348, less than a decade after the frescos were completed—part of the continent-wide Black Death. I was fortunate enough to visit Siena last summer, and saw the frescos after visiting the magnificent cathedral—whose planned expansion to become the largest church in Christendom was halted by the plague. (The project was never resumed, due to errors that had been discovered in the construction—and, I assume, the weakened condition of the city.)
Lorenzetti’s fresco thus can be seen as a document of self-assertion by a city that was—as we can understand but its creator and patrons could not—at the very height of its power. The dreadful and diminished future brought by the Black Death is certainly not visible in the idealized depiction of the city, or even within its horizon. But it has been present to viewers practically since the plaster was dry. And of course its presence is intense for us now, given our own—mercifully less horrendous—experience of a widespread disease.

It is hard, then, to look at Lorenzetti’s work in our moment without our pandemic in mind—and it is imperative to make the connection explicitly if we want to consider what the work says to us today. Here I will pick up on a stimulating the discussion of my earlier posts by our group back in December, reflected in Robert Bailey’s incisive comment from December 20, that raises the question of what is “inside” and “outside” of the fresco—and therefore related questions about the theory I argue the fresco conveys.

As I concede in my reply to Robert, the depiction of the good city is very much self-contained: everything that matters to the story it tells is visible; there is little sense that what is beyond the frame is relevant. This discounting of the image’s outside matches what seems to be the conception of niche construction being depicted, namely that it has no (meaningfully autonomous) outside either. The “inside” of niche construction consists of the social processes by which people sustain themselves; the “outside” would be the recalcitrant, unpredictable nature Robert mentions in his comment. The version of niche construction celebrated in the fresco, however, is social all the way down; it simply assumes minimally habitable environmental conditions, and leaves the rest to human cooperation.

But perhaps Lorenzetti’s vision is discredited by its seeming obliviousness to threats to the project of niche construction that come from outside its horizon. The pandemic—which has been interpreted as a version of “nature’s revenge”—should thus reaffirm the suspicion that the outlook on the way people inhabit their surroundings Lorenzetti represents is dangerously hubristic. On this view, niche construction encourages a deluded expectation of invulnerability; in fact we should expect unforeseen natural hazards, e.g. unexpected disease vectors, as surely as the return of the repressed.

It is certainly true that Lorenzetti does not thematize natural hazard, or mitigation of risks from such hazards. But it is notable—if only indirectly applicable—that he does in fact depict an intrusion into the fresco from outside its frame. That is on the wall opposite the idealized countryside; he shows a band of soldiers entering a scene of pillaged farms that anticipates their depredations.

Can this invasion be viewed as a metaphor for the plague, hence for the kind of “external” threat to niche construction the fresco seems otherwise to lack? This reading is, admittedly, anachronistic. Nonetheless, the association between plague and invasion is compelling, especially in light of one of the consequences of the Black Death, as discussed by Barbara Tuchman: the appearance of bands of armed men marauding the countryside (p. 13). Perhaps this association is something our pandemic compels us to see in Lorenzetti’s fresco, so that we are compelled to acknowledge in the scene an image of the republic’s vulnerability to danger from outside its own sphere—including from an essentially unsocialized nature.
There is no question that Lorenzetti was deeply concerned with the vulnerability of republican political institutions. As I note in my reply to Robert, vulnerability is a central theme within republican political theory. But the theory’s emphasis, certainly expressed in the fresco, is on an “internal” source of danger to the republic: the moral character of the rulers and citizens. 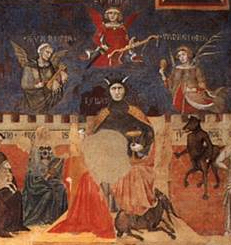 Consider, then, a more literal reading of the invading army. Diana Norman argues persuasively (pp. 331 ff.) that this part of the fresco is a direct reference to an actual recent invasion of Sienese territory by forces from Pisa. Pisa, Norman holds, played a specific role in the Sienese political imagination: it represented tyrannical rule (pp. 325 ff.). The presence of the armed men is a further expression of the meaning of the entire left hand wall on which they appear. The city they approach has architectural elements evocative of an anti-republican regime (p. 320). And, appearing at the very left end of the wall they stand in visual correspondence with the scene at the very right end: the frightful figure of Tyranny, surrounded by associated vices.

The invading army can thus be read as an external manifestation of an internal cause: the evil character of the tyrant, who, as a text panel explains,

neither wills nor acts in disaccord with the filthy nature of the Vices … and calls around herself every evil schemer. She always protects the assailant, the robber, and those who hate peace, so that her every land lies waste.

The lesson that Lorenzetti himself seems most likely to be trying to convey on the left hand wall, therefore, is not so much that the Sienese should be vigilant against threats from beyond their borders, anthropogenic or natural, but rather against the threat from within their own moral character. The vulnerability he highlights is not due to the strength of a neighboring city, but instead to their own weakness: they themselves might succumb to the temptations of their own selfish impulses.

But perhaps my insistence on Lorenzetti’s “internalism” only reinforces the concern that his theoretical outlook is not suited to the problem we face with the pandemic. If my reading of the fresco is correct, perhaps that shows its interest is largely historical and aesthetic, but that the political theory of niche construction it conveys is radically incomplete, hence ultimately inadequate to the theoretical needs posed by this moment.

Detail of fresco: Figure of the Common Good

I will conclude this post by suggesting one ready extrapolation that indicates how the republican theory Lorenzetti presents might encompass situations like the pandemic; in my next post I’ll add another. The basic idea is simply that the moral character that is the core of the republic’s “inside” is expressed in political and social structures which enable better or worse responses to external dangers, anthropogenic or natural. And, as I discuss in my previous posts, at the core of moral character, on Lorenzetti’s view, is dedication (or its absence) to the Common Good; he associates Justice (as a personal virtue) with precisely this moral attitude.

Now the textual explications that accompany the images in the fresco at most merely allude to the state’s response to external danger, noting that Justice “guards and defends those who honor her.” And, to be sure, Lorenzetti seems to have external anthropogenic danger in mind. Thus the tyrant, who figures the utter rejection of Justice, does nothing to protect the city from armed invasion—indeed, the destruction it brings is a fitting expression of tyranny.

But it seems obvious that the same moral logic applies to non-anthropogenic dangers, like disease. Indeed, protecting against pandemic is a uniquely perspicuous example of dedication to the Common Good: because everyone is vulnerable, the benefits of resisting the disease are enjoyed by all. And, as Robert observes in his comment, it is not hard to conceive of protection against disease as an aspect of niche construction—features of the niche provide the “extended immune system” Kyle Harper describes in his post on Pathogens and the Anthropocene.

In my view, then, it is possible, and indeed helpful, to think of the pandemic in the way suggested by the theory that informs Lorenzetti’s fresco (here’s one example; here’s another). For that way emphasizes that what is morally salient about the pandemic is not that it comes from “outside” of the human realm, from recalcitrant nature. Rather, what matters is what is “inside” people’s social and political institutions—those internal factors determine the impacts of the external threat. The quickest glance at the infection rates across the globe makes this, for Americans, shamefully and scandalously clear.

The first post looked at the fresco’s depiction of the good city and its countryside, arguing that Lorenzetti illustrates the idea that people cannot construct the niche that supplies both their metabolic and cultural needs without the security provided by political institutions devoted to justice. In that sense, the idealized niche we see on one side of the chamber can be characterized as “republican;” it is made possible by people’s capacities to create and sustain political institutions dedicated not to the private benefit of the rulers, but to the common good.

The second post looked at the opposite wall of the chamber, which illustrates the failure of niche construction—to the point of niche destruction—that results from tyrannical politics, which allows for injustice to corrode the cooperative relationships people need to create the conditions for their survival and flourishing. I concluded that we can interpret the frescos not only in the narrow terms of political institutions, but more broadly in terms of the “moral climate” of just interactions among people in the state those institutions must foster. By implication, the human capacity to act justly lays the foundation for human niche construction.

One thought on “Our Pandemic and Siena’s Plague: Looking Outside Lorenzetti’s Fresco”