Let me emphasize something from the start: I mean “small r” republican—this post (and another to follow) will have nothing to do with the “capital r” American political party. I’ll consider some ideas associated with a traditional way of thinking about how political life should go, the tradition known as “civic republicanism.” Thus this will be an exercise in environmental political theory—not a discussion of environmental politics. I won’t deal with actual political disputes about environmental matters, as full as the headlines are with them. Rather, I’m going to present a statement of an ideal: a normative vision of humans’ relationship with the environment.

But the statement I’ll discuss is a pictorial one. It is the 14thcentury Sienese painter Ambrogio Lorenzetti’s fresco series known as the “Allegory of Good and Bad Government.” Painted in 1338-39, the series consists of panels on three walls of Siena’s city council chamber. The center panel (on the left in the image above), which faces the side of the room where the nine city magistrates would have sat to deliberate, is manifestly an allegory of the virtues those in power (the immediate audience of the painting) should internalize. As intellectual historian Quentin Skinner has shown, in this section of the series Lorenzetti depicts a normative conception of politics, derived from the tradition of civic republicanism, according to which the leaders of the state should dedicate themselves to the common good. The other two walls depict, on the left (not visible above), the effects on the republic when that norm is violated, and on the right, the effects when it is upheld. In both cases, Lorenzetti shows in idealized form the poorly and the well governed city, and the surrounding country-side of each.

It is notable that on both left and right sides Lorenzetti devotes the same amount of wall space to the city and the country-side—the latter is not simply the background to the former. Rather the country-side is as much a part of Lorenzetti’s subject as is the city, and he directs our attention not to one or the other, but rather to their interaction. The prominence of this aspect of the work suggests that Lorenzetti’s frescoes illustrate a theoretical understanding of the political character of human beings’ environmental situation.

Spiders’ use of webs to capture prey is an example of niche construction. Photo by Graham Winterflood.

As I have indicated in previous posts, I believe we can articulate a broad conception of humans’ environmental situation by appealing to the idea of niche construction. An organism’s niche can be conceived as the set of characteristics of its environment that make it possible for it to live—features like the availability of food and water, the proper ambient temperature, and other factors relative to its specific metabolic needs. But those environmental characteristics are defined by the organism’s own capacities to obtain what it needs—the cheetah’s speed means that it occupies a niche that includes fast-running impalas. And many organisms have the capacity to modify their environment to make what it needs more available; a spider web is a perfect example. It is in this sense that organisms can be said to construct their niches.

The course of our evolution has led human beings into the situation that we must occupy a completely constructed niche: we survive not by taking up what we need to live directly from nature; nature affords us what we need only through an “interface” we fashion, through our labor, that makes those resources accessible. That interface is manifested at two levels: in physical transformations of the landscape—but more fundamentally in the network of relations involved in social cooperation, including cooperative work in the landscape, and relationships of exchange.

The right hand panel of Lorenzetti’s fresco series, showing the effects of good government, is filled with images of niche construction at both levels. The panorama of the country-side is, in effect, a catalogue of agricultural activities, most prominently the sowing, harvesting, and processing of wheat. (That the fresco presents activities that take place throughout the year as occurring simultaneously indicates that we are being shown an idealized representation of the agricultural economy as a system, not, say, a realistic representation of the country-side on one given day.) The landscape is marked by many instances of human modification, including the plowed soil; the built structures, like houses and farm buildings; and the transportation infrastructure, like the road and bridge in the foreground; and the mill just above the bridge, which is a key part of the “interface” that modifies the products of natural processes so that they more readily satisfy people’s metabolic needs.

But Lorenzetti also indicates the social relations that underlie these physical manifestations of niche construction. The harvest scene near the center of the landscape, just above the road, shows reapers whose individual actions are coordinated to produce sheaves of wheat, and also threshers, whose movements must be synchronized to effectively remove the grain. Thus in his depiction of the extraction of resources, from an environment modified to accommodate that activity, Lorenzetti shows that these core activities of niche construction operate in a social manner.

The Effects of Good Government on the City (click to enlarge)

But note that the country-side is not by itself the niche Lorenzetti depicts; his subject encompasses both country-side and city. The city is obviously a constructed environment; indeed we see some literal construction work taking place near the top of the fresco, near the middle of the city scene. But the ample traffic through the city gate that gives the city and the country-side access to each other presents them as an inter-related system. At its core that system is likewise social—in particular, it is based on exchange. Thus, the road along the fields is busy with country people bringing goods to the city. Inside the city walls we see a variety of scenes of economic life, in which, for example, a raw material like wool is delivered to a workshop to be worked into a product of immediate use. And we see a peasant man shopping for shoes at the cobblers’ stall—one of several vignettes Lorenzetti offers of the commercial interactions that take place within the city.

These interactions show how the city and country-side together function as an integrated niche providing for metabolic needs, with the country-side as the source of raw material and the city as the point both of transformation of those materials into useable goods, and of distribution to their users (including people from the country). But there is another order of needs that this integrated niche also provides for: to paraphrase Aristotle, these are needs associated not just with maintaining life, but with living well. Thus, Lorenzetti (who likely knew Aristotle by way of Aquinas) depicts the city’s provision of beauty (in the form of personal and architectural ornament), education (in the form of a teacher and class), and leisure (in the form of noblemen heading out of the city to hunt with falcons). And Lorenzetti’s panorama of urban life gives a prominent place to a dance, seen in a central plaza; this can be taken as a symbol of the cultivation of human capacity the integrated niche affords, while the dancers’ graceful configuration can be taken as a cultural reflection of the complex social interactions that sustain the form of life that niche provides. 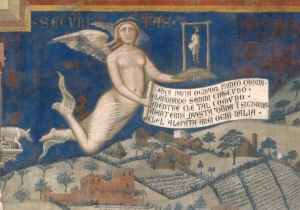 Detail: Security. The banner reads: “Without fear every man may travel freely and each may till and sow, so long as this commune shall maintain this lady [Justice] sovereign, for she has stripped the wicked of all power.”

But where, in the bustling scene Lorenzetti offers us, can we catch sight of politics? How, that is, does he illustrate the idea I’ve imputed to him, that the human relationship with the environment has a specifically political character? Note, this goes beyond the notion that people gain resources from the environment by means of social cooperation; to speak of politics here is to call attention to governance. Politics in this sense has an avatar in the fresco: the figure of Security who hovers over the scene just outside the city wall. This figure is an allegorical intrusion into an otherwise literal (if idealized) depiction of material life. Her label, and the banner she carries, make clear that Lorenzetti is illustrating the idea that the good life that we see before us is made possible by the presence of security; security is the condition for humans to engage in niche construction.

However, Lorenzetti makes clear that security is a political accomplishment: it is the most fundamental effect of good government, on which the other effects we see in the fresco depend. He makes this connection visually, by linking the depiction of material life on the right hand wall back to the manifest allegory of the moral qualities required for good governance depicted on the central wall of the fresco series.

The figure of Security resembles the figure of Peace near the center of the allegorical tableau, who indeed appears to be casting her gaze towards Security’s location on the right hand wall. Thus, the figure of Security can be seen as the point at which the specifically republican political ideals expressed in the central wall of the fresco series enter into the space of material life depicted on the right, marshalling those ideals into an explanation of how it is that the project of niche construction Lorenzetti shows can go so well.

I will close by quoting  Skinner on the conception of peace found in the civic republican tradition: “peace should be viewed not as a mere absence of discord … but rather as a state of triumph, a victory over the forces of discord and war that constantly threaten to destroy our common life” (p. 7). Thus, he observes, Lorenzetti depicts Peace as “a victorious force,” triumphant over the violence symbolized by the armor underneath the cushion on which she lounges (p. 33). Security, likewise, is associated with an image of a challenge overcome: she holds a scaffold with a hanged man, presumably a criminal who has been executed for unjust acts; this visually echoes images of execution of wrong-doers on the central wall. Lorenzetti, that is, reminds the viewer of the ever-present threat of injustice in people’s social interactions with one another, and thereby affirms an understanding that without the political effort to maintain justice there will be no peace. And without the security that attends peace the activities that provide for human needs could not take place; it seems therefore that the most fundamental aspect of human niche construction is the political project of upholding justice. In my next post I will develop further this political aspect of niche construction by considering the harmful environmental effects of injustice he depicts on the left hand wall, and what his depiction of their cause reveals about Lorenzetti’s understanding of justice. 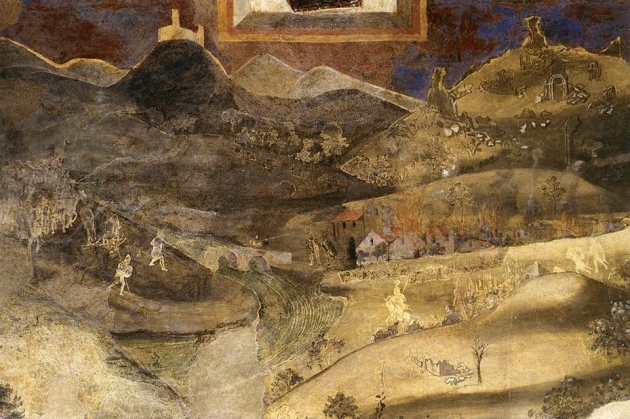 Effects of Bad Government on the Country-side