CITATION:
David N. Bristow and Christopher A. Kennedy. 2013.  Journal of Industrial Ecology, vol. 17, no. 5: pp. 656-667.
ON-LINE AVAILABILITY:
doi: 10.1111/jiec.12038; at author’s ResearchGate site
ABSTRACT:
Using the city of Toronto as a case study, this article examines impacts of energy stocks and flexible demand in the urban metabolism on the resilience of the city, including discussion of directions for further study of the resiliency of the urban metabolism. An important element developed is the nominal residence time of the energy stocks. This value defines how long an energy stock lasts under typical patterns of energy use. The findings suggest that the residence times of many sources of energy overcome vulnerability when energy supply shocks last on the order of hours or a few days, but that the measure is limited to assessing only certain types of commonly used energy sources in aggregate terms. Discussion is included on the uncertainty of this measure and on the metabolic and resiliency implications of new technologies intended to reduce energy use and improve sustainability of cities and the use of the urban metabolism as a means of comparison. The methodology employed highlights how waste energy could be used to increase the resiliency of the city’s water supply, but also how the study of the urban metabolism would benefit from a more disaggregate form in the study of sustainable and resilient cities.

As living beings, we all metabolize—matter in, to fuel our activities, and matter out, as waste products. The dictionary defines metabolism as “the chemical processes that occur within a living organism in order to maintain life,” which Wikipedia expands to three primary purposes of metabolism—conversion of food (fuel) to energy, conversion of food (fuel) to (organic) matter, and elimination of wastes.

Commonly, we don’t notice our own metabolism—it just happens, until something goes wrong with the system, causing everything from the familiar “hangry” emotional state of anger and frustration provoked by hunger lasting a matter of hours—to, if persisting more than a few weeks, chronic conditions like joint pain, and if persisting longer, death. The human body can adjust its metabolism to conserve energy, but at some point, with no energy input cells will die.

The urban metabolism idea makes use of this pattern to think about cities. Bristow and Kennedy approach the concept of urban metabolism as industrial ecologists; they examine the inputs and outputs of Toronto, as a case study for assessing the resilience of urban systems to shock. They suggest that “a city is much like an ecosystem” requiring both “high quality inputs and the export of low quality waste” (pp. 656). They quantify and examine a set of energy inputs—food and fuels, and outputs—solid waste and wastewater. They draw motivation from the recognition that, as cities grow, and as anthropogenic changes to the earth expand, metropolitan regions are at increased risk for massive shocks that are likely to disrupt the flow of goods in and waste out of densely packed urban communities. 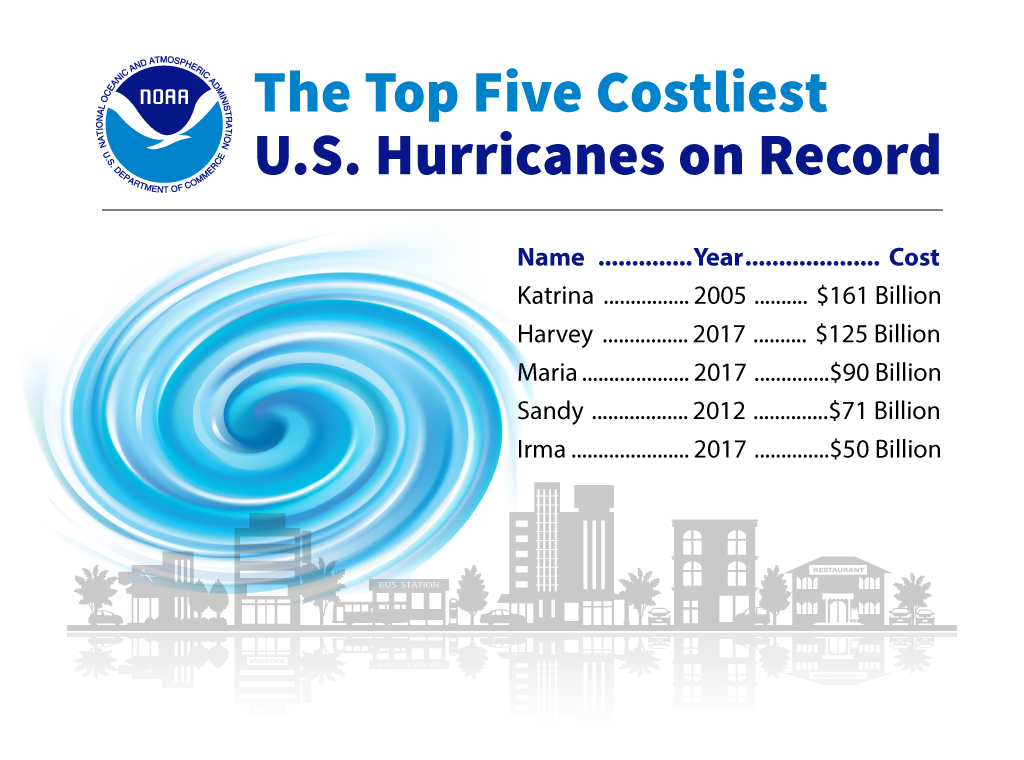 Recent natural events remind us of the fragility of the metabolism of human settlements. For 2017 alone, NOAA lists 16 weather- and climate-related disasters with billion-dollar losses. Coastal cities in particular face significant vulnerability given that modeled climate projections under expected warming scenarios call for increased frequency and intensity of tropical storms (Knutson et al., 2010). When Hurricane Harvey dumped four feet of precipitation on Houston in short order, it resulted in one of the costliest natural disasters in U.S. history. In addition to the flooded homes and lost lives, petroleum refining and storage facilities were cut off—releasing toxic substances into the environment as well as causing significant disruption to the energy grid. The impacts of the storm reverberated through the entire nation’s economy, in part by impacting energy prices (thankfully the disruption lasted only a few weeks (Kaplan, 2017)). According to NOAA, Harvey ranks only behind Hurricane Katrina in terms of damage costs, and three of the five costliest hurricanes in US history occurred in 2017.

Harvey also revealed the fragility of the systems established to help cities to dispose of the outputs generated by their residents. Garbage services in Houston largely halted in the wake of the storm, but then had to help carry off countless possessions ruined by the storm in addition to the typical volume of trash produced by the city. The garbage created by the storm was calculated to fill the stadium in Houston two times and necessitated a partnership with the City of San Antonio to help carry off and dispose of the debris.

Shocks to the waste disposal system of a city are not new. In 1968 New York City sanitation workers went on strike to improve pay and working conditions; garbage piled up, clogging city streets with refuse and odor. And last year Athens, Greece experienced a similar fate when trash piled up as collectors protested a labor agreement with the government. However, it is notable that we are now seeing this kind of shock to the urban metabolism from environmental rather than social causes, necessitating new perspectives on the resilience of urban settlements.

Superstorm Sandy revealed similar predicaments for planning cities in the Anthropocene. In addition to the remarkable economic cost, the storm created severe environmental impacts and damage to the water treatment systems in its path of devastation from Maine to Florida. In parts of the United States homes were flooded with sewage when treatment systems, pushed beyond capacity, flooded untreated water into nearby communities and waterways. The storm knocked out power to nearly 9 million customers ranging from the East Coast to the upper midwest, and greatly impacted the petroleum infrastructure of the region. Impacts to petroleum supply systems, combined with power outages to fueling stations, led to gasoline shortages—a bleak reminiscence of the long lines at gas stations during the 1970s energy crises. But unlike the 1970s crises, generated politically, our New Normal of disruptive events owes its origin to both the continuing growth of cities, and rising impacts of changes happening in the environment.

This New Normal shows the imperative cities face to develop their resiliency. Bristow and Kennedy deploy the urban metabolism concept to show just what resiliency involves. Although urban metabolism has been studied for a half century, Bristow and Kennedy make the distinction of focusing on energy stocks, rather than just flows of matter and energy. They define a “nominal residence time” for an energy stock based on the duration of the supply under typical patterns of use, and ultimately argue that this consideration plays a central role in resiliency—that energy storage and flexible demand underpin the metabolic resiliency of cities.

Bristow and Kennedy’s case study of Toronto illustrates their argument. Toronto’s cold climate necessitates home heating—achieved primarily by natural gas, transported from well outside the city. Spatial redistribution of supplies to establish energy stores within cities could greatly mitigate vulnerabilities, especially when disruptions persist over a week or more.  Absent sufficient stores of natural gas within the city, Toronto’s residents would be faced with the dire prospect of cutting down the urban forest for fuel.

Bristow and Kennedy’s approach prompts some questions about other ways an urban metabolism might become more resilient. What if more of our wastewater were recycled, for example, and used to replenish local water tables? What if energy were produced and stored locally to reduce loss and ensure supply in times of trouble—something Stephanie Pincetl suggests for Los Angeles? As she notes, distributed production of energy, as with roof-top solar panels, can help achieve energy storage within cities, greatly mitigating vulnerabilities. Finding ways to reduce the overall waste created by inhabitants would obviously help as well.

To some degree, the distributed energy model motivated Jimmy Carter’s installation of solar panels on the White House. Absent the economic incentive for widespread development of alternative energy, this executive action infamously failed. But this approach is nonetheless vital, especially as cities grow. Local and distributed sources of energy provide us with eggs in multiple baskets, to mitigate the impact of an arterial disruption. Combining this with enhanced efficiency in building would go a long ways towards increasing the resilience of cities.

I love good chocolate, but kids in the house means that I face the challenge of how to keep a reliable store on hand. My approach is to sequester bars here and there — insurance for a catastrophic breach. I once had to explain myself when my daughter found a bar tucked between the kitchen towels. I’ve adjusted my behavior as stores have been looted, to avert disaster. If my typical metabolism amounts to six bars a week, all sequestered amongst the kitchen towels, and I can re-stock only weekly, then I (and those around me) face grave risk. But if I distribute my bars amongst three or more sites, I can avert shock in the wake of a breach, and still maintain over a half week’s supply of energy storage.

As a chocolate-loving parent, I found the metabolism metaphor appropriate. In particular, Bristow and Kennedy’s emphasis on energy storage and distribution seems an essential approach to achieving an increased resiliency for cities of the future.