CITATION:
Moore, Jason W. 2000.  Organization & Environment, vol. 13: pp. 123-157.
ON-LINE AVAILABILITY:
doi: 10.1177/1086026600132001; at author’s website
ABSTRACT:
This article proposes a new theoretical framework to study the dialectic of capital and nature over the longue duree of world capitalism. The author proposes that today’s global ecological crisis has its roots in the transition to capitalism during the long sixteenth century. The emergence of capitalism marked not only a decisive shift in the arenas of politics, economy, and society, but a fundamental reorganization of world ecology, characterized by a “metabolic rift,” a progressively deepening rupture in the nutrient cycling between the country and the city. Building upon the historical political economy of Marx, Foster, Arrighi, and Wallerstein, the author proposes a new research agenda organized around the concept of systemic cycles of agro-ecological transformation. This agenda aims at discerning the ways in which capitalism’s relationship to nature developed discontinuously over time as recurrent ecological crises have formed a decisive moment of world capitalist crisis, forcing successive waves of restructuring over long historical time.

“Urban metabolism,” according to Stephanie Pincetl, “provides a metaphorical framework to examine the interactions of natural-human systems” (Pincetl et al, 2012: 194). The metaphor, of course, sees the city as an organism: “Organisms need energy and resource inputs, transform them to do work, and produce waste, much like cities do” (ibid.). The limitations of the metaphor notwithstanding (cities might actually be better treated as ecosystems than as individual organisms), it has helped researchers to organize rigorous quantitative analyses of material and energy flows through cities, in order, for example, to support the management of those flows in pursuit of sustainability.

Pincetl argues for an “expanded” urban metabolism concept—one that “requires a political–ecological–theoretical framework and an understanding of power and money” (ibid.). She notes that a key source for that framework is Marx, who used the notion of metabolism to characterize the interactions between human beings and the physical environment on which they labor to support themselves (op. cit.: 195). The paper by Jason Moore serves as an introduction to the Marxian contribution.

Moore is well known for bringing a Marxist perspective into discussions of the Anthropocene. He has, famously, suggested that we would speak more accurately by referring to the “Capitalocene,” in order to advance the view that the pervasive changes in the Earth System we now observe are not due to some generalized human force (a mystical “Anthropos”), but to a particular social and economic order: capitalism. His 2015 book Capitalism in the Web of Life: Ecology and the Accumulation of Capital uses Marxian (and other) approaches to provide a comprehensive picture of capitalism as “a way of organizing nature” (2). The present article offers a tighter focus on Marx’s understanding of metabolism, providing explanations both of the critical stance inherent in Marx’s view, and of why cities’ metabolisms have a global reach. In this post I will summarize these two explanations.

Moore anchors his theory of the ecological transformations wrought under capitalism in “Marx’s concept of metabolic rift” (2000: 125). The metabolism that is riven involves the cycling of nutrients. In an agricultural community crops are consumed locally, and waste is recycled into the soil. The idea here is that the metabolisms of individual consumers are seen as part of a larger system. Marx captures the systemic relationship by extending the idea of metabolism to encompass the relations among the individual organisms. Today we would use the concept of ecology instead; that term was coined only the year before Marx’s Capital appeared (Foster, 2000: 195), so was perhaps not familiar to him. But, as John Bellamy Foster suggests, the idea of metabolism powerfully captures the organic, material relation between human beings and nature constituted by labor (op cit.: 157).

The metabolic rift occurs when consumption occurs far away from agricultural production, and the waste is not returned. Marx has cities specifically in mind here.

Capitalist production, by collecting the population in great centres, and causing an ever-increasing preponderance of town population, on the one hand concentrates the historical motive power of society; on the other hand, it disturbs the circulation of matter between man and the soil, i.e., prevents the return to the soil of its elements consumed by man in the form of food and clothing; it therefore violates the conditions necessary to lasting fertility of the soil. (Capital, Vol. I, Ch. 15, Sec. 10)

Thus, by way of illustration, the nutrients embedded in food produced in the heartland and shipped to a coastal city are flushed out to the sea after being eaten. This is a loss in strictly material terms, i.e. in terms of soil degradation. Ruth DeFries describes this process in her book The Big Ratchet, the subject of a previous post. She recounts the use of guano from South American to restore the fertility of fields in Europe, noting Marx’s recognition of the absurdity of this situation (85-92).

DeFries, however, does not emphasize the critical outlook Marx adopts. In his eyes the situation was not simply absurd, but morally wrong: it is not merely a matter of declining soil quality, but more fundamentally a matter of human alienation. The economic system by which agriculture is directed toward production for distant markets (and requires inputs from distant sources) “annihilates the peasant, that bulwark of the old society, and replaces him by the wage-labourer. Thus the desire for social changes, and the class antagonisms are brought to the same level in the country as in the towns” (Marx, op. cit.) These economic transformations displace people from the country to the city, generating impoverished lives in both settings. Ecological deterioration, in other words, is at once a social deterioration, of which Marx of course aims to develop a thoroughgoing critique. 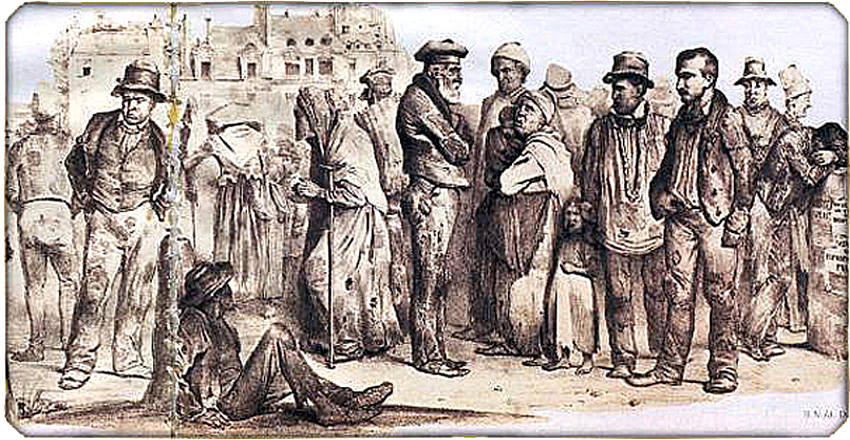 Moore emphasizes an additional social dimension, hinted at by DeFries’ explanation of the international guano trade. For in his view the metabolic rift is a fundamental driver of capitalism’s expansion across the globe. His capsule sketch of the appearance of the metabolic rift describes the mechanism.

In essence, the land was progressively mined until its relative exhaustion fettered profitability. At this point, economic contraction forced capital to seek out and develop new ways of exploiting territories hitherto beyond the reach of the law of value. This process of geographical expansion and social innovation inaugurated a new phase of capitalist development (124).

Indeed, Moore frames world history since the late 15th century as succession of metabolic rifts, each stage encompassing more and more of the planet as capitalist economies reach out beyond their current spatial boundaries to remediate declining fertility. This involves, most evidently, bringing more and more, and more distant, territory into the market system, i.e. making its agricultural products available for sale in core regions. But also, and eventually (as new territory becomes less available) primarily, agriculture becomes more intensive through the application of technology—culminating in the green revolution of the 20th century and the application of genomic techniques now well established in the 21st.

Thus, for Moore the core dynamic visible in the metabolic rift in effect generates the kind of “world system” theorized by Immanuel Wallerstein, whose views Moore attempts to synthesize with Marx’s.  For Moore, “Wallerstein offers a historical-geographical framework capable of comprehending . . . the ecology of capitalism as a world-historical process” (129). That is, he uses Wallerstein to help conceive of the capitalist economic system, which links far-flung areas of the world in networks of commercial exchange and flows of investment, as also a kind of ecosystem, in the sense that it involves flows and (periodically ruptured) cycles of energy and nutrients.

For our purposes, this aspect of Moore’s argument contributes to the idea that virtually any city’s metabolism is actually global in scale: it is part of a system that moves commodities, people and money across the planet. The metaphor of metabolism, that is, must not restrict our attention to what goes on inside a city, as goods are metabolized by its inhabitants. We must recognize that the urban metabolism binds together the areas, even distant ones, that are the sources of goods—not to mention the areas that are sinks for waste—along with the city itself. Grounding that recognition in the idea of metabolic rift, with its inherent critical dimension, should remind us that the processes that support urban life can at the same time be responsible for inequity elsewhere.