TITLE
Democracies with a future: Degrowth and the democratic tradition
CITATION:
Marco Deriu. 2012.  Futures vol. 44, pp. 553–561.
ON-LINE AVAILABILITY:
doi: https://doi.org/10.1016/j.futures.2012.03.016
ABSTRACT (partial):
The interrogation of a possible connection between degrowth and democracy inspires some questions of political epistemology. Is degrowth a socio-economic project which can be simply proposed as an ‘‘issue’’ and a ‘‘goal’’ in the democratic representative system, without discussing forms and processes of the political institutions themselves? Is the degrowth perspective fully compatible with the democratic theories and practices as we currently know them?
*
TITLE
De-growth: Do you realise what it means?
CITATION:
Ted Trainer. 2012.  Futures, vol. 44, pp. 590-599.
ON-LINE AVAILABILITY:
doi: https://doi.org/10.1016/j.futures.2012.03.020
ABSTRACT:
The implications of de-growth are much more far reaching and radical than seems to be appreciated. It is important to start with a brief consideration of the magnitude and nature of the global predicament, because when this is understood it becomes clear firstly that consumer-capitalist society cannot be made sustainable or just, secondly that a satisfactory and viable post-capitalist society must take a particular form, and thirdly that specific implications for transition strategy are indicated.

We saw in the previous post that we can think about urban metabolism in terms of theoretical frameworks or case studies. But in addition, our group’s ongoing engagement with the idea offers us a way to consider the future, in particular a possible future not defined by rampant growth.

In recent years, the term “degrowth” has emerged as a way to think about one path toward transforming our societies, in light of recent ecological and environmental concerns about the consequences of our activity on the planet. Modernity is often characterized as a period of enormous change—“all that is solid melts into air” in Karl Marx’s famous phrase—but we increasingly define it by its enormous growth: economic growth, population growth, urbanization, and so on. Humanity and its impacts are expanding, taking in more, using more, and wasting more, with increasingly dire planetary consequences. All that is solid melts into carbon dioxide.

Degrowth promises to reverse this modernizing project, much as scholars Christophe Bonneuil and Jean-Baptiste Fressoz have promoted the Anthropocene as an alternative periodizing term to modernity. Because we cannot return to prior times, we must instead curb our society’s continued growth. An inherently speculative idea, degrowth invites futural thinking in both utopian and dystopian modes. E. O. Wilson and Kim Stanley Robinson have recently advocated Wilson’s “Half Earth” plan to empty half of the planet’s surface of human settlement. In some ways, the seeds of degrowth are already with us—farm-to-table restaurants that source food locally, or de-industrialized “shrinking cities“—but a pragmatic vision of how to degrow human society on the planetary scale that, properly speaking, is needed remains both difficult to imagine and far from practicable. In the interest of further speculation, some of it a bit wild, we offer the following remarks on two key texts about degrowth, which we read with a slant toward their implications for our group’s ongoing thinking about urban metabolism.

In “De-growth: Do you realise what it means?” Australian limits-to-growth advocate Ted Trainer asks readers to be realistic about degrowth, a project “far more daunting than most green and left people imagine” (593). Trainer sees consumer capitalism as totally unsustainable, ripe for dismantling, and recommends “ignoring” the consumer economy “to death.” The future under his “Simpler Way” would be radically decentralized—slower paced, with shorter distances traveled regularly—a shrunken geography of “frugality, micro-scale localism, ‘subsistence’, self-sufficiency and non-material life satisfactions, at the household, neighbourhood and town levels” (594). He calls for abandoning market economies, meaning no transactions with profit or interest. Instead, economic actors would barter privately-held resources and share common or public resources. 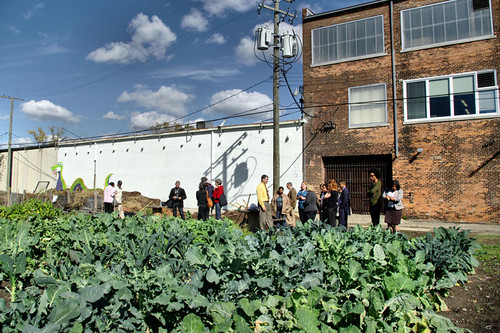 Trainer also calls for dismantling some large infrastructures including major roads and factories, to reduce production, fossil fuel use, and long-range shipping. Disused industrial spaces would become urban farms or common land. People would reach backyard gardens and workshops, and small neighborhood shops, by bike or by foot. Today’s eco-lifestyle movements including cycling, “slow food,” “tiny houses,” and “home power” gesture at Trainer’s hopes. Politically, this lifestyle requires consensus-driven direct democracy, which is better explored in Deriu’s article. Above all, the Simpler Way proposes a colossal shift in values, a “battle” of “ideology and awareness” birthing a more collectivist and sustainable society.

In “Democracies with a Future: Degrowth and the Democratic Tradition,” sociologist Marco Deriu considers the relationship between democracy and degrowth, the latter of which he conceives broadly as a socioeconomic project, relegating questions of ideology and awareness to the revived democracy he proposes. If, on the one hand, “demands for business autonomy have historically provided a path towards guaranteeing the freedom and civil rights of the citizen against the tyranny of central political and religious authorities” (554), then, on the other hand, we are witnessing the tyranny of the economy as a centralized authority (quite visible, for example, in the American lobbying system and recent critiques of “bought” politicians). Today, he states, “Many relevant decisions for the fate of our future are taken outside any democratic control” (554).

Arguing for reviving democratic traditions against economic liberty as a means to achieve degrowth, Deriu affirms that “A democracy that wishes to respond to social and ecological challenges is obliged to place limits on growth and take responsibility for the future” (556). Toward such a program, he revisits concepts and institutions necessary for democracy, including the demos itself, its culture, and its practices, advocating for a collective educational process that cultivates democracy as an economic check on growth. Deriu insists on a program of values and rights that makes degrowth seem both desirable and achievable because they would align with a newfound and broadly held consensus about right action and justice.

Neither author makes an explicit theme of our group’s two main current concerns: the city and metabolism. However, both Trainer’s account of what degrowth might provide us as a society, and Deriu’s recognition that degrowth will require a political takeover of economic power, are crucial for our thinking. Indeed, the trio city-metabolism-degrowth offers much to consider regarding how we ought to inhabit the Anthropocene, and what sorts of experiences might await us in the future. At the same time, thinking about degrowth in terms of cities, the focus of much (economic or population) growth today, as well as in terms of metabolism, a concept that we employ here both metaphorically and biologically, offers new insights into degrowth.

Reading Trainer and Deriu together with urban metabolism in mind not only offers insight into degrowth itself as a concept or goal, but also suggests ways of resolving an inherent tension between the two essays: Trainer promises something like a more egalitarian society resulting from degrowth, while Deriu suggests that a push for democracy and its consensus-based, communal, and equal politics is a precondition for achieving degrowth. It strikes us that politicizing the economy and economizing politics will have to work together to achieve the desired result. Neither is the magical key to the other, and a program such as degrowth, which involves nothing less than remaking our entire society, will involve, to be a bit repetitive, remaking our entire society—from our attitudes to the ways we organize the economy, transform environments, and meet our basic material needs.

The Feel of Degrowth

Among the more urgent tasks for degrowth advocates is imagining what a degrown society will feel like. Cozier, we’d say, but a bit Spartan. Trainer’s “Simpler Way” gestures at the sensory, affective, and aesthetic dimensions of degrowth. Here, we highlight four of its major aspects.

While these four qualitative imaginings of degrowth might make it seem rather like austerity, we will show in our next post that austerity, which is designed to save growth, cannot get us to a degrown future. Instead, our next post imagines paths to degrowth via the concept of metabolism.

One thought on “Urban Metabolism and Degrowth, part 1”