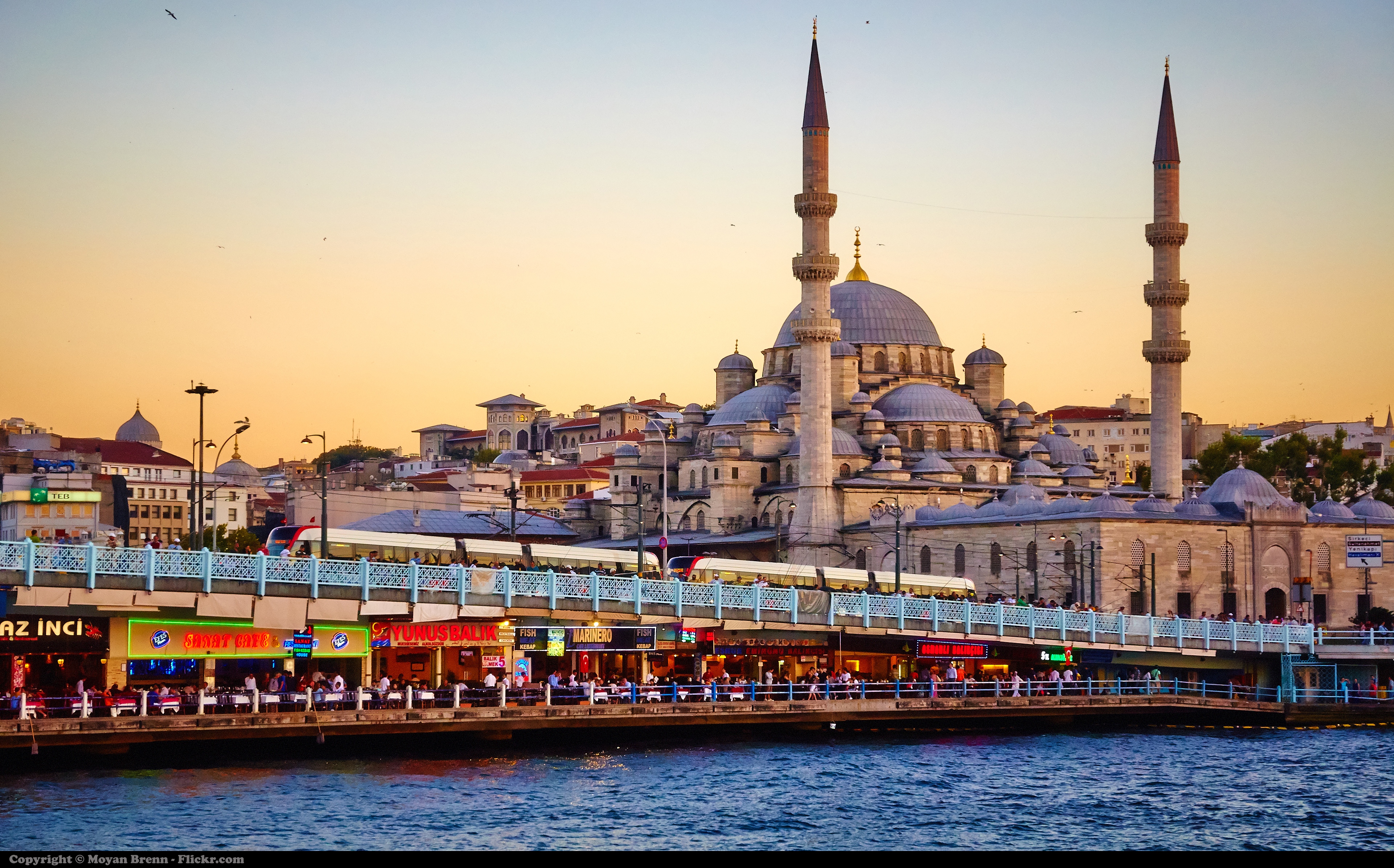 Galata bridge in Istanbul, bridging east and west, old and new. By Moyan Brenn [CC BY 2.0)]

Urban landscapes provide useful spaces for thinking through the complexities of the Anthropocene. They are hybrid locations in which the social and ecological are clearly enmeshed (see recent posts by Zev and Ingo). As an archaeologist I am immediately drawn to the material and temporal dimensions of urban spaces, and the ways in which they influence and are informed by perceptions of history, culture, and environment. In this post I touch on archaeological thinking and modern cities, comparisons between ancient and modern urban landscapes, and other kinds of ancient urbanism.

Full Disclosure: I am not an urban specialist. In my academic life I am an archaeologist whose focus is attuned to small and middle range societies of the deep past. My direct expertise is perhaps limited to a life lived in several cities, and one field season at an Iron Age city in Turkey. Archaeologists, however, spend a fair amount of time thinking about the material dimensions of human life and, well, time. Modern cityscapes are multi-temporal and multi-spatial. The projects of humans and non-humans are structured by built spaces that have pasts and planned-for futures (Edgeworth et al., 2015; see my post on this article ). So, too, cities accumulate pieces of the surrounding landscape; urban environments are composed of manufactured or transported materials. The mud brick and carved stone of ancient cities have been replaced in many places with more novel materials such as concretes and plastics. Current and future generations will remake, modify, or avoid these materials and their structures. Perhaps some will become buildings without a cause, much like Oklahoma’s salmon ladder (see post by Robert). The persistence of many ancient cities into the modern era highlights how drawn out the dialogue between humans and their material histories have been (check out this timely CNN slideshow).

Some aspects of a city’s history are benign, other materials such as pollutants and various effluents impact the lives of persons, flora and fauna over different time scales. The lead that lined water pipes in ancient Rome is still traceable in the harbor of Ostia (Delile et al., 2017). While the health effects may have been negligible, the rise and fall of non-local lead follows the history and collapse of Rome’s exploitation of far reaching lands. Chernobyl’s shorter modern history, replete with continued impacts on humans and the environment, will be traceable over much longer time spans. Even rapidly built modern cities incorporate experience from other places with a goal of sustaining, at least for a time, an imagined sociality. Where they become vulnerable is from the forgetting, erasure, or lack of local, long-term knowledge that would inform communities about longer-term processes. Indeed, those cities most vulnerable to near and long-term difficulties from a warming climate (Miami and New York come immediately to mind) are vulnerable because of past unforeseen futures.

Humans have not lived in urban landscapes for very long, relatively speaking. Early urban landscapes have captivated archaeological thought because they ostensibly represent a new kind of human existence centered on permanence, large and diverse populations, intensified land use, and rural hinterlands. The historical emergence of cityscapes, and the intensive exploitation of regional resources, are cited by some as indicators of the early Anthropocene (Erlandson & Braje, 2013). The processes of early urbanization—terraforming, resource extraction, land use intensification, engineering responses to climate events—is often detectable in “natural” systems, such that human action and environmental process become intertwined and effectively inseparable (Zhuang & Kidder, 2014). In this vein, the relevance of early cities comes not only from an apparent break with prior lifeways, but with their similarity to and bearing on modern life. Classically, the rise of cities has been closely tied to the emergence of the state as a new political, ideological, and economic structure. Using this definition, true cities are comparably recent, the earliest states with cities may date to only 5500 years ago in Mesopotamia.

1524 Map of the Aztec city Tenochtitlan.

The equation of cities to states (or, more problematically, the identification of states based on the presence of urban centers) has been challenged in recent scholarship (Cowgill, 2004). Indeed, the archaeological record is composed of many different kinds of urban landscapes. Comparably low-density but highly terraformed urban spaces may exist with state institutions, just as high density civic-ceremonial centers may exist without the state. In this regard, one may ask whether ancient cities are comparable phenomena to modern and future cities. Continued research into the biological and psychological dimensions of city dwelling is certainly needed, but perhaps as Downey (2016) argues, there is a more generalized mode of urban niche construction, albeit one that affects those of varied statuses and opportunities differentially. So, too, recent study suggests that despite differences in political or economic organization, ancient cities and modern cities share similar increasing returns to scale. Ortman and colleagues (2014) argue that this finding supports the notion that the effects of network processes are universal, and that ancient cities are relevant for modern urban studies.

Finally, the archaeological record provides important insights into different kinds of urbanization, and different logics of urban planning and dwelling. Many ancient cities were constructed to make reference to, incorporate, or reference in microcosm a community’s relationship with the cosmos. For example, Cusco, the capital of the Inca, was a center place whose built environment brought together persons, the land, the sky, water, and non-human persons such as gods, ancestors, and animals (Farrington, 2013). Certainly, the immense labor dedicated to such civic projects and the symbolism attached to them were central to Incan ideology and stateship. But these same spaces structured and were informed by ontologies wherein diverse kinds of memory and knowledge about place, ecology, and persons could be encoded and remembered. In this sense, Cusco and other non-Western urban centers such as Teotihuacan or Cahokia played fundamental roles in shaping how residents understood or perceived the history, structure, and future of the broader landscape. These perceptions no doubt informed social strategies (Haskell & Stawski, 2017).

The archaeological record also provides evidence of different kinds of urbanism, without cities, often in unexpected places. Working in the Brazilian Amazon, Heckenberger and colleagues identified a nested, multi-centric network of towns organized around ritual centers (Heckenberger et al., 2008). So-called galactic polities were linked by road and ditch earthworks. Communities were supported by resource management that involved landscape clearing, canal digging, and wetland management for fish farming. While not cities, these urban environments were characterized by ecological heterogeneity and fragmentation that resulted from management strategies. The long-term impacts on biodiversity are evident today, as differences in forest structure due to ancient landscape interventions can be mapped with satellite imagery.

Early or non-western urban landscapes have a direct bearing on our understanding of current and future cities. On one hand, models of social networks suggest that the processes behind the organization and optimization of city life may be universal. Examination of the biocultural effects of city living may also be fruitful. On the other hand, alternative urbanisms provide opportunities to consider how varying perspectives on the relationship between community and cosmos can result in different entanglements with place, environment, memory, and society.  Although more urbanism may be in our future, maintaining diversities in urban dwelling would seem to be an important component of futures planning.

Farrington, I. S. (2013). Cusco: urbanism and archaeology in the Inka world. Gainesville: University Press of Florida.

2 thoughts on “Early Cities and Other Urbanisms”