The male showed up with breakfast.

As we get started with our series on the urban Anthropocene, I’d like to approach the topic as a biologist, and think of cities as places filled with various kinds of life.

Of course cities are built by humans for humans. Everywhere humans settle, like other organisms we act as ecosystem engineers. Nowhere is this more dramatic than in cities; we create our own environment–and benefit immensely. 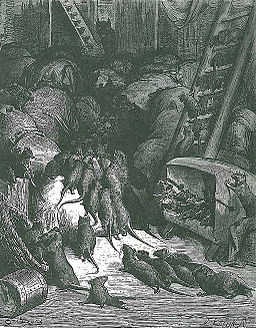 But urban environments are also habitat for countless species of microbes, plants, and animals, all of which have to adjust to the conditions we have created. Some are under our direct care and control, like the pets we live with or the mowed lawns we maintain. Others follow us around; rats, for instance, have lived with humans for a very long time, benefiting from the environment we provide. Many more creatures, I assume, have been unable to adjust to human presence and were forced out of the way. I speculate that the number of species extinctions due to urbanization must be high.

Something that fascinates me in particular is the way that modern cities especially create unique and relatively new habitats that lead to novel ecological interactions. This type of interaction is criticized by some as a massive departure from the natural state. But for others they make for an interesting topic of study. For example, as discussed in a previous post, Emma Marris has argued that a “rambunctious garden” also has value as an ecosystem, even if it is made up of components that without human intervention would not have ended up in the same space.

In one way, perhaps. A novel ecosystem can certainly provide people with aesthetic pleasure and other important values. This, we might be tempted to think that a green area is a green area. But to an ecologist or conservationist, however, I think the picture looks different.

Mainly, the crucial difference is that not all species are equally well embedded into an existing ecosystem. This is particularly relevant to the issue of invasive species. These often thrive in the highly disturbed habitats humans create, and are not true parts of that ecosystem: very few other species can interact with them. In fact, the absence of natural competitors, predators, or parasites is often part of the success story of invasive species (Sakai et al. 2001).

Sometimes, however, charismatic animals do very well in urban environments. One example is the Peregrine falcon (Falco peregrinus), pictured at the top of this post. It is a raptor that is often found breeding on cliffs or other high vertical structures. They hunt birds in flight and, probably starting with the first high buildings–churches in Europe–humans have provided them with a home away from their natural breeding sites. By keeping pigeons in abundance in cities (both by creating suitable habitat for them nad by breeding them), humans also provide falcons a food source. What is good for Peregrine falcons, however, is bad for one of the small species in the same family, the Eurasian kestrel (Falco tinnunculus): they are specialized on feeding on small mammals, which in cities are less abundant and more difficult to find, as compared to more open landscapes (Kettel et al. 2017).

Urbanization is studied by biologists of all specializations, though a distinct field of Urban Ecology is now emerging. (Lepczyk et al. 2017). Let me mention some of its findings. In a previous post I already mentioned the mosquito species that evolved in the London Underground (Byrne & Nichols 1999). Animal behaviorists study how bird species respond to urban noise and how they change the frequencies of their songs so that they can communicate despite the noise that surrounds them (LaZerte et al. 2016). These are cases where apparently selection induced by humans is changing animals, not because they are domesticated in the strict sense, but simply because they are associated with human habitation.

The association we observe in urban settings among animals and humans may not only have bad outcomes for the former, but can also lead to negative consequences for the latter. One of the central effects of living in high density is that information and goods can be moved around quickly – but the same is true for parasites and diseases. Arguably, the high density in medieval and modern cities helped the spread and the speed of spread of the bubonic plague. This deadly disease is caused by a bacterium (Yersinia pestis); it is transmitted by fleas living primarily on rats, which due to the close cohabitation with humans can jump onto them. Urban centers were not alone in being devastated by the Black Plague, but some of the most dramatic accounts come from cities (Curtis 2016).

As more and more humans move into urban areas, more and better knowledge of the effects of this global transition is needed. Urban Ecology makes a germane contribution to our understanding of the Anthropocene.