This week, Dr. Suzanne Moon and I begin team-teaching “Climate Change in History” (HSCI 3473: History of Ecology and Environmentalism) as a Presidential Dream Course, a program which allows University of Oklahoma faculty to upgrade an existing course into its dream version, with guest lectures open to the public by international leaders in the field, who also make in-person classroom contact with undergraduate students while on campus.

We’re excited to work with students to understand one of the grand challenges of the contemporary moment. Climate change is challenging humans to reevaluate and restructure the social, political, and environmental foundations of our societies. How did scientists and others come to recognize this threat and how can we understand the emergence of global and local efforts to confront climate change? This course explores the history of climate change, from the emergence of climate science to debates about projects meant to mitigate and adapt to it. Throughout, we will evaluate the past to consider our paths forward.

Focusing on the modern period of history in global perspective, our course will argue that ideas of climate and climate change have a history, which can be traced by looking at the emergence of modern climate science and later debates and projects aimed at mitigating or adapting to climate change. We will explore both climate’s influence (often “impact”) on human society and human impact on the climate, through both anthropogenic climate change and successful mitigation strategies. The course is thus structured around parallel stories of environmental change, human environmental knowledge, and human action on environmental issues. Under the broad umbrella of climate change, course topics include agriculture, deforestation, disasters, globalization, land use, population control, and the extraction and management of natural resources.

As a teacher taking on a hot topic of contemporary action and debate, I aim to create a particular tone in the classroom: urgent, but not alarmist; realistic, but also hopeful. If cooler heads and rhetoric can prevail, a hotter planet won’t kill us.

Winslow Homer’s watercolor Hurricane, Bahamas (1898) is our cover image for the course–for good reason. Held today at the Met in New York, the painting is both dynamic and ominous. The trees, almost main characters, indicate the wind’s force and direction. The wind-blown palms disrupt the drooping silhouette we expect to see in a landscape painting. Homer uses them to indicate a weather shift—a storm approaches. Through this rendering visible of the invisible wind, what impresses me most as a viewer and as a historian is the mood of anticipation and foreboding, the painting’s conveyance of time and motion in the still and two-dimensional medium of watercolor.

Homer’s image feels apt today. Physical storms are being transformed by climate change, becoming bigger, more frequent, more damaging, and less predictable. Rainfall, flooding, and coastal surges are intensifying. Homer’s setting in the Bahamas recalls recent damaging hurricanes nearby: Matthew in Haiti, 2016 and Maria in Puerto Rico, 2017, which had significant social, economic, environmental, health, and safety impacts, comparable to those of American storms Katrina and Sandy. More dangerous storms remind us that we don’t have to wait to see what climate change will bring: climate change is already affecting how we live. As in Homer’s painting, the storm is coming, but it’s also already here.

Homer’s image is also apt as a metaphor: there is a social or human storm brewing: the winds of opinion are shifting heavily in terms of climate change. A storm is brewing in political conflict over climate change, pitting the majority who recognize the reality of climate change and demand action on it, against the powerful minority of elite actors trying to maintain their hold on government regulation and the fossil fuel economy. Sites of important action include: oil pipelines, climate accords, and social movements from divestiture to Extinction Rebellion and the one-woman army Greta Thunberg. As in a hurricane, the direction and force of these currents of opinion are clear. People believe that climate change is real, is threatening, and must be addressed now.

We may use different terms to organize our decision-making—greenhouse effect, global warming, climate change, Anthropocene, or sixth extinction—but what we all share is a sense that land, sea, and sky are changing in ways that put us at risk, as we hope and we work for the resilience to ride out the storm safely.

Oklahoma is an interesting vantage-point for studying climate change in history. Sometimes it seems all Oklahoma environmental news is bad news: pipeline leaks and human-made earthquakes. Our state figures heavily in the annals of climate change denial—and not only James Inhofe’s famed 2015 stunt of bringing a snowball onto the Senate floor to disprove climate change, which now documents for posterity how little he understands climate science. But also in Petrol Pete and other fossil fuel industry attempts to play down what many scientists, scholars, and activists now call a climate “crisis” or “emergency.” All this might suggest we have a snowball’s chance in hell of studying climate change in a forward-looking, rather than backward-looking, way in Oklahoma.

But there is good news from Oklahoma as well. As a hub in the U.S. energy industry, Oklahoma is also seeing significant growth in wind and solar production, which shows our society slowly making the turn away from fossil fuels. The Oklahoma City area, for example, has a surprising number of electric car charging stations. Last year for the first time the amount of energy produced from coal fell below the amount from renewable sources in both the U.S. and the U.K. Coal is dying out; oil and gas more slowly. Oklahoma will feel the direct economic and environmental effects of the energy industry’s transformation: old jobs lost and new ones created, leaving land and water scarred by decades of drilling, as we learn to keep carbon out of the sky.

Oklahoma also takes a leading role in atmospheric science thanks to the National Weather Center here in Norman. Climate scientists today study “feedbacks,” or climate changes that have effects which cause further climate change: for example, when greenhouse-gas-induced warming melts permafrost, which releases methane, which serves to increase warming. Unless we want to see climate change snowball or cascade, recalling other human-made disasters from Frankenstein to Fukushima (but now on a planetary scale, as a possible existential threat to our species), our attempted solutions to climate change need to address what we put into the air, and the technologies from trees to taxes that we use to take or keep carbon out of it. Oklahoma’s prowess in atmospheric science, weather forecasting, and the energy industry make it an important place to think about climate change.

All lectures are free and open to the public. For information or accommodation on the basis of disability, please contact: Peter Soppelsa (peter.soppelsa@ou.edu) or Suzanne Moon (suzannemoon@ou.edu). Support for this course was provided by the Office of the President of the University of Oklahoma, the Department of the History of Science, The Department of History, The Department of Native American Studies, and the Institute for Risk and Resilience. 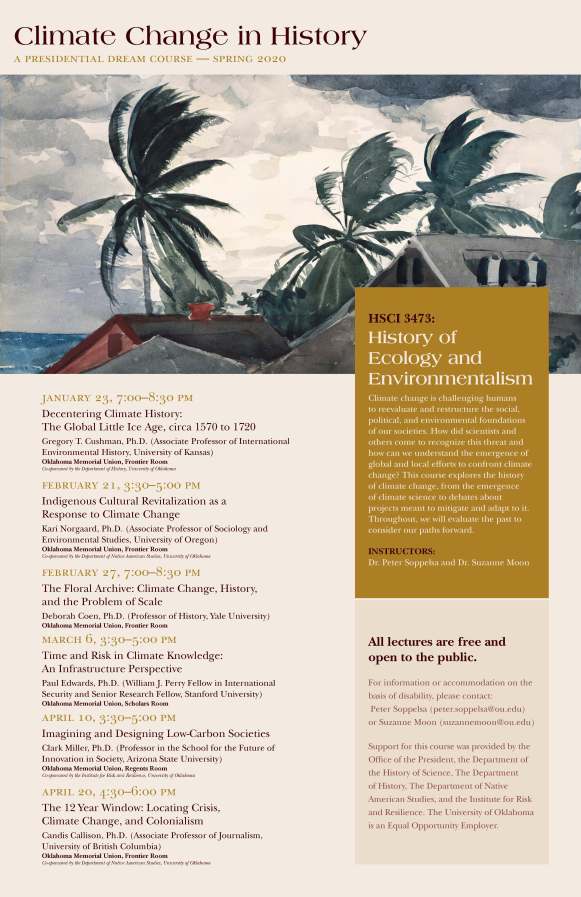