In 2016, the Oklahoma Energy Resources Board (OERB) published the fourth volume of its “Petro Pete” series of illustrated children’s books. To promote Petro Pete’s Big Bad Dream, K-2 classes throughout the state were invited to enter a contest that October. Participating teachers agreed to read the online version of the story to their classes and then to post to the OERB’s Facebook page photographs with “the students holding their favorite petroleum by-products (sic) from their home or school.” The winner was determined by the number of online “likes” and a review of the photo by OERB judges. Submitted by a class in Tulsa, the winning entry shows 20 first-graders on their school’s playground posing with a variety of prized items: three footballs, several backpacks, a clear bag of candy, a dog leash (or maybe a belt), a basketball, stuffed animals of various species, a plastic bottle that might be shampoo, a toy car, and a pair of sunglasses. To aid the students’ selections, the contest guidelines included a list of 97 familiar items that are manufactured with petroleum ranging from backpacks and balloons to wax and volleyballs. For winning, the students received a celebratory visit to their class by two state legislators accompanied by the OERB’s costume mascot Petro Pete. During the visit, the elected officials led them in another round of story time, reading them Petro Pete’s Big Bad Dream as the students followed along in their complimentary hardcover editions.

In addition to the language arts preparation from reading the book, the contest guided the students to enact the moral of the story by making a connection to a valuable possession. Petro Pete’s Big Bad Dream begins with Pete reading in bed about oil and natural gas. He falls asleep wondering what “life would be like if we didn’t have petroleum,” and then he wakes to that reality. When his mom knocks on his door to rouse him for school, he looks around to find that many of his things are missing. Without a tooth brush, comb, or his usual clothes, he heads outside to wait for the school bus in his pajamas. Deprived of gasoline, wheels, plastic components, and much else, the bus does not arrive. Without tires and a seat, Pete’s bike leans unhelpfully against the garage door. Forced to walk, he arrives at school just in time. His teacher, “Mrs. Rigwell,” reviews the previous day’s lesson with the promise of explaining the mystery of Pete’s situation. Another student, Nellie, recalls learning that petroleum is a source of energy composed from animals and plants that inhabited Earth millions of years ago. Pattie explains that derricks are machines engineered to drill for petroleum underground. Mrs. Rigwell concludes the review session by announcing that after lunch and recess they’ll have a new lesson on the work of refineries.

During the break from class, Pete’s misfortune persists and affects his classmates. A milky substance spills unfrozen from an ice cream dispenser that lacks refrigeration. On the playground, storage boxes are empty of footballs, basketballs, and soccer balls. When the students return, Mrs. Rigwell creates a chart on the board to describe how crude oil extracted from the earth is refined to manufacture different kinds of products. On a day they’re disappearing, they seem especially necessary. At the end of the school day, the narrative shifts to reveal that Pete has, of course, been asleep for this whole story. The sound of the school bell is actually his morning alarm. Released from the big bad dream, he leaps from bed excited that his things are restored. After dressing in his signature overalls, hard hat, and goggles, Petro Pete exclaims to his dog, “Repete! That was all a dream! All of my petroleum by-products are back.” On the final page, Pete smiles and waves from the back of the OERB school bus as it drives away from his home. His experience has taught him that he is always using petroleum; it is integral to most things he needs and enjoys. The additional, unsubtle inference to take from Pete’s dream is that we should feel excitedly grateful to be the beneficiaries of the oil and natural gas industry. In the story, no other emotions are associated with the extent of our dependence on petroleum. 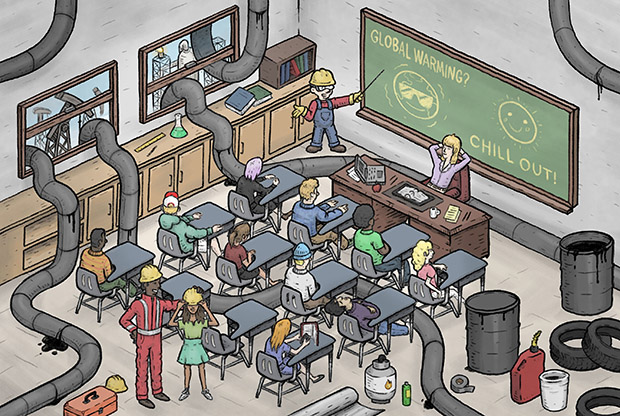 This fourth installment in Petro Pete’s positive experiences with oil and natural gas became a topic of interest for investigative journalism into the OERB’s involvement in Oklahoma’s schools and the similar influence of oil industry advocacy groups in other states. The Center for Public Integrity in Washington D.C. and National Public Radio’s State Impact Oklahoma partnered for Jie Jenny Zou and Joe Wertz’s exposé “Oil’s Pipeline to America’s Schools,” which was published online by both organizations on June 15, 2017. An abridged version appeared the same day in The Guardian, and Wertz’s radio report focusing on just the OERB was broadcast by NPR affiliates in Oklahoma. Each version begins with an anecdote about the fall 2016 Petro Pete book tour. The reporting correctly identifies the OERB as a non-profit agency that was founded by the state legislature in 1993 but is funded entirely by voluntary contributions from oil and natural gas companies. The agency has a dual mandate, and is legally bound to commit half of its annual spending to the first objective of cleaning up abandoned oil-wells and promoting well-site safety. Oklahoma residents with access to television will be familiar with the OERB’s public service commercials urging children not to play on well-sites. The second charge, as stated on the inside cover of Petro Pete’s Big Bad Dream, is to “educate Oklahomans about the vitality, contributions and environmental responsibility of Oklahoma’s oil and natural gas industry.” Since the introduction in 1996 of its first curriculum for teachers, “Fossils to Fuels,” the OERB has addressed this second objective with increasing involvement in primary and secondary schools. Zou and Wertz report that OERB curricula are used in 98% of the state’s school districts. The OERB Homeroom website displays a running count of teachers who have completed a workshop to prepare them to offer interactive, grade-level appropriate STEM lesson plans; as I write, the total is up to 16,621. Completing the training also provides teachers with free materials to use for science exercises in their classrooms, access to password-protected online content and lesson plans, and eligibility for funding to support class field trips.

For Zou and Wertz, the discrepancy between the underfunding of public schools caused, in part, by reductions to state appropriations for education and the OERB’s generous resources is a recipe for schools and teachers under strain to accept materials that “paint a rosy picture of fossil fuels in America’s classrooms” and send “mixed messages” about climate change. Two satirical television news programs that followed up on their exposé were more harsh.

Jordan Klepper’s The Opposition on Comedy Central targeted the OERB as a propaganda operation. In its segment “Thanks, Big Oil, for Teaching Oklahoma’s Kids,” comic field reporter Laura Grey goes on location in Oklahoma City to uncover the truth behind the state’s school funding crisis as well as the prospect that the oil and natural gas industry could save education in the state. Newsbroke, an online production of Al Jazeera, ran a longer segment on “How Big Oil Brainwashes Kids” that associates the OERB more pointedly with the chief strategy of climate change denial: fomenting doubt. The show’s host links the Petro Pete books and videos by the “Bill Nye knock-off” Professor Leo to recent legislative efforts in several states to require schools to “teach the conflict” about climate change.

Punching up at the powerful oil and natural gas industry, the investigative report and satirical videos characterize the OERB as another agency spreading misinformation in concert with those companies, industry advocacy groups, conservative think tanks, and elected officials that Naomi Oreskes and Erik Conway labeled Merchants of Doubt. Published in 2010, the book documents the extensive, coordinated strategy to counter the scientific consensus on climate change not with refutation but instead by promoting the idea that the agreement is hype, the experts are conflicted, and that reasonable people must wait and see what surety further research will provide in due time. Pitched in defiance of a preponderance of evidence, the publicity campaigns Oreskes and Conway identify pretended perfect certainty is the measure of scientific veracity, making “due time” interminable. Their findings were amplified in 2015 when Inside Climate News’ eight-part investigative report, “Exxon: The Road Not Taken,” revealed that Exxon conducted “cutting-edge climate research decades ago and then, without revealing all it had learned, worked at the forefront of climate change denial, manufacturing doubt about the scientific consensus that its own scientists had confirmed.”

The involvement of oil and gas corporations in funding the transmission of science curricula to primary and secondary schools would seem to invite associating the OERB with other discredited campaigns to encourage skepticism about the scientific consensus. I want to suggest that this is a mischaracterization. The satirical videos, in particular, ridicule the OERB selectively and neglect that its teaching materials are both popular with many teachers and created in consultation with committees of educators. The curricula for students correspond to the Oklahoma State Department of Education’s Academic Standards, and the relevant learning objectives are reprinted with the OERB’s lesson plans.

My point, however, is not to suggest that the OERB isn’t implicated in climate change denial. The story it tells to students may be right about the precious utility of petroleum products, but by itself that message fails to acknowledge that the majority of fossil fuels will end up in the atmosphere and not in plastic toys. Instead of disseminating doubt, OERB contributes to climate change denial by diminishing the significance of global warming with inattention, while at the same time providing otherwise legitimate content, resources, and assistance to educators across Oklahoma. In other words, OERB manages to advance the neglect of anthropogenic climate change while maintaining a seemingly plausible denial of such irresponsibility. With this approach, the OERB’s outreach to schools introduced in 1996 anticipated a shift in strategy for climate change denial that has emerged into prominence more recently.

Last month, the Community Interest Company Influence Map issued a report on “Big Oil’s Real Agenda on Climate Change.” The group found that since the COP 21 Paris Accord, the five largest publicly-traded oil and natural gas companies – BP, Dutch Shell, ExxonMobil, Total, and Chevron – have together spent $1 billion on lobbying against environmental regulations and on publicity campaigns to rebrand them as responsible stewards of the environment who are indeed expert in the reality of anthropogenic climate change. Considering the ICN’s series, Exxon’s approach is especially galling. Even as the company denies the veracity of ICN’s reporting, which was derived from studying the company’s own documents and interviewing scientists who conducted the research in the late 1970s, Exxon now boasts that it has been at the forefront of innovative climate change research for 40 years. This is somewhat true, but perversely so since for years Exxon provided policy-makers and the public misinformation while hiding its research findings. According to the Influence Map report, the five corporations’ actual investment in de-carbonization technologies and alternative energy research is minimal when measured against their recent spending to accelerate the extraction of fossil fuels. The scale of the difference is so disproportionate that public relations campaigns to promote the companies’ new green identities would also be risible were they not so expensive.