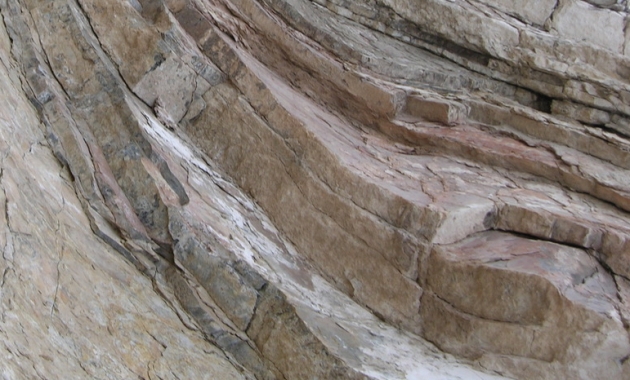 One of my earliest memories as a freshman at UCLA took place in the front row of a cavernous, wood-paneled lecture hall equipped with a black-topped resin demonstration table. The class was Introductory Geology, and the professor a bearded, pony-tailed free spirit giddy with the anticipation of his latest surprise demonstration. He was playfully tugging a lump of Silly Putty while explaining the concept of ductile deformation, the idea that rocks and other materials can deform without breaking. You can think of this as a plastic behavior in the sense of Robert’s previous blog post. Then, he set the Silly Putty on the demonstration table, ducked down and, with one quick motion swung a 20-pound sledge hammer previously concealed behind the table and smashed the lump. Jagged bits of Silly Putty exploded outward, quite literally striking the lesson into our brains.

The lesson centered on deformation, and how Earth materials exhibit contrasting rheological behavior depending (in part) on the time scale of the deformation— just like Silly Putty. “Rheology” refers to the flow of matter— its physical behavior. You might intuit that the physical behavior of a substance changes in response to, say temperature: peanut brittle hardens to its final, breakable form only after cooling sufficiently from its ductile state. Blacksmiths to glass-blowers, foundry workers to chefs all know and employ this principle of the temperature-dependence of physical behavior.

But rate of deformation is perhaps a less-intuitive control on strain. When stretched or compressed very slowly, Silly Putty—and Earth materials—effectively flow, reflecting the connotation of plastic behavior. This seems spectacularly implausible. But folded rocks—visible in mountainous regions by virtue of natural exposures or road cuts in cross-sectional view, and by virtue of plane windows or Google Earth in aerial (plan) view—bear witness to the reality.

Faced with a rapid exertion of force, however, rocks break in an impressively brittle fashion. In each case, the rate of the applied stress dictates the outcome: in one case a smooth fold and in another a jagged scarp. 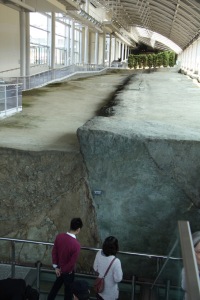 Fault scarps record the rapid deformation resulting from an earthquake. Scarps can easily weather away, but famous (or infamous) examples abound: In Japan, the record of the incredibly destructive 1995 Kobe earthquake is clearly visible in a scarp around which a museum was constructed. A mere few meters of fault slip may not seem like much, but records an enormous, and geologically instantaneous outpouring of tectonic energy.  The 1994 Northridge earthquake (southern California) occurred on a previously unrecognized “blind thrust” fault that slipped a bit more than 3 meters, and raised the local mountains ~70 cm (USGS & SCEC, 1994), over the course of 10-20 seconds. This translated into the highest ground acceleration ever recorded in urban North America, plenty sufficient to cause my parents, who were fast asleep atop the epicenter, to be thrown vertically into the air. Thankfully, although stirred and shaken, they were ok. Tectonic plates behave brittlely (under rapid stress), which we humans find rather shocking.

Robert’s post of some weeks ago focused on the rheological concept of “plastic” and its application to art; it presented the use of the word “plastic” as an adjective rather than a noun. Robert noted that, used in this way, plastic arts refer to transformational processes that configure or reconfigure matter, and are thus distinct from “subtractive techniques like carving”— wherein the artist changes the quantity of matter being worked.

Following this reasoning, it seems that humans—each and every one of us, have become masters of the plastic arts, transforming Earth by reconfiguring matter. Our varied activities—ploughing of grasslands, burning of forests, combustion of fossil fuels, conversion of limestone to lime (for cement)—have shifted carbon from numerous terrestrial reservoirs into the atmospheric and oceanic reservoirs.

As we’ve explored on previous posts of this blog, rate, time, and change (deformation) are key themes of the Anthropocene. Humans of the Anthropocene have transformed the face of the Earth, with the most grandiose example now playing out as climate change (and associated issues, such as biodiversity loss). And, just as plastic art is ephemeral art, some view climate change as nothing worrisome because Earth’s climate has changed in the past.

That is, just as plastic art is ephemeral art, can perturbations to Earth’s environment be considered ephemeral reality, in the sense that Earth self-heals through time—Earth exhibits a plasticity? As a geologist, I know very well that Earth’s climate has changed in the past, to even more dramatic extremes than those forecast for our immediate future. And I know that Earth’s plasticity enables it (at least the physical environment) to rebound from changes to its system. But this gives me no solace in reference to our current situation, because today’s rate of change is extraordinarily rapid, and as I saw in that classroom my freshman year, rapid changes can bequeath shocking results—destructive breaks in the system that include permanent alterations of the biosphere.

The vagaries of human timescales and geologic timescales have conspired to trick us. Our short-circuiting of the carbon cycle has produced a transformation that seems almost imperceptible over the course of a human lifetime, and thus appears plastic, ductile, moldable, reversible, ephemeral. But we have conflated two vastly different timescales. The Earth system is reeling from a state of disequilibrium, and hasn’t adjusted to the applied stress. When it does, it will be as if we’ve taken a proverbial sledge hammer to it.

Our hope is that we can effect a course correction to place us on a more sustainable path; in a sense, we’d do well to emulate Buzz Lightyear, who managed a sort of plasticity of perception when he exclaimed “This isn’t falling, it’s flying with style.” The question of our time is this: Can we shift from falling to flying, by decreasing the rate of our geologically instantaneous planetary transformations?