Two recent special sections of the journal The Anthropocene Review offer a set of interdisciplinary reflections on the “technosphere.”[1] In this post, I will discuss several of the contributions in order to ask what potential the technosphere concept holds for understanding cities in the Anthropocene.

The technosphere idea has existed since the 1970s, but has not enjoyed broad currency until its recent revival by geoscientist Peter Haff. As guest editors Christoph Rosol, Sara Nelson, and Jürgen Renn explain in their Introduction to the special sections, the technosphere is defined as the totality of human artifice, the earth’s “archaeological strata,” including landscapes, technologies, and material culture. For example, as Gabrielle Hecht and Pamila Gupta recently wrote, “there’s now enough concrete on the planet to produce a 2mm thick, full-scale replica of Earth, and enough plastic to completely wrap that replica in cling film.”

According to Haff, this human-made sphere displays three important characteristics—autonomy from human action, global integration, and a systematic character. Thus, the term raises the question of whether the things that humans produce can take on a “meta-ecological” role analogous to other spheres (biosphere, hydrosphere, atmosphere, etc.) that are self-organizing, -preserving, and -replicating, while exerting a structuring or limiting effect on human activity (Rosol et al., 3-7). These structural forces help explain how human-generated processes like climate change cannot always be controlled. (Haff thus raises familiar concerns about path dependency and technological momentum, leading some of his harsher critics to suggest that he is committed to metaphysical (perhaps Aristotelian or Hegelian) teleology.) And just as water is an important medium of interaction between the bio-, hydro-, and atmospheres, so material produced in the technosphere can have effects that feed back into the other spheres. Haff could thus explain anthropogenic climate change as the technosphere’s impact on the other planetary spheres.

We can begin to apply the technosphere concept to cities in a strictly material way. The first contribution to the special section, co-authored by a large interdisciplinary group of prominent scholars including Haff himself, Erle Ellis, Naomi Oreskes, John R. McNeill, and Will Steffen, provides an initial quantitative estimate of the technosphere’s mass: 30 trillion metric tons (Tt). More than 60% of this mass constitutes the human-built environment, including 11.1 Tt of urban construction, and 6.3 Tt of rural structures. Cities thus make up 36.9% of the technosphere, with rural buildings forming another 20.9% (Zalasiewicz et al., 12-13). The technosphere’s development is therefore deeply connected with another global process: urbanization.

Among the technosphere’s most distinctive aspects is its significant “waste layer.” While the biosphere and hydrosphere can (at least in principle) endlessly recycle all their materials, the cyclical character of the technosphere is compromised by the fact that humans cannot reuse all that we produce. The remainder we call “waste.” (In this sense the technosphere is not genuinely “spherical”—it is not self-contained.) Johan Gärdebo et al.’s contribution on the “orbital technosphere” outlines how aging satellites become space junk, orbiting debris that threatens to block the sight lines, transmission lines, or orbital path of working satellites. Their piece thus reminds us of the system dynamics by which useful technology (the “active technosphere”) becomes junk—cumbersome and risky—that can feed back to threaten the smooth functioning of the active technosphere. Similarly, Miriam Diamond’s contribution argues that toxic chemicals are both “enablers and poisoners” of the technosphere. Certain chemicals are useful, even necessary, for the function of our technological world, despite their toxicity. But because of their toxicity, after they are used they remain as threats to both the technosphere and the biospohere. Satellites and chemicals demonstrate, much like plastic and nuclear materials, how parts of the technosphere’s active layer cannot be maintained indefinitely, but ultimately revert to the waste layer. Though producing waste is a “normal” part of the technosphere’s function, it also threatens the sphere’s normal operation.

Acknowledging the waste layer feeds smoothly into the idea of metabolism. The waste layer points to systemic inefficiencies—materials produced by the technosphere’s own metabolic processes which cannot be re-metabolized. Some basic facts and figures about New York City’s solid waste management illustrate how cities can concentrate the technosphere’s metabolic inefficiencies. In 2012, New York City’s 300 square miles of land housed 8.361 million people and produced up to 14 million tons of waste annually (by one internal estimate).

But civil engineer Christopher Kennedy et al. found in a major 2015 study of urban metabolism in megacities that New York was the world’s “dirtiest” megacity, producing nearly 33 million tons of waste annually, almost tripling the 12 million tons produced by second-place Mexico City. New York City also topped the lists of per capita energy and water consumers. 76% of New York City’s residential waste must be sent out-of-state, as far as Pennsylvania, Ohio, Virginia, and North Carolina. Some of NYC’s recyclable paper, metal, and glass travels as far as China and India to be recycled. 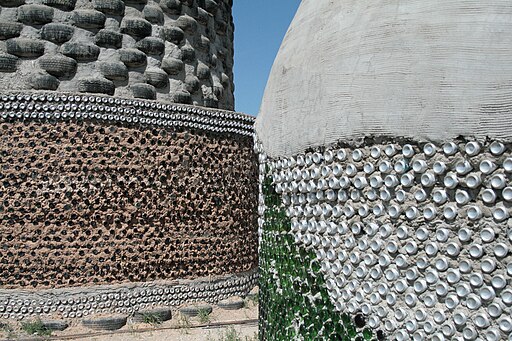 As the waste piles up or travels farther, we see, in light of the contributions from Diamond and from Gärdebo et al., how urban-technological metabolic inefficiency can threaten sustainability and even survival. Discussions of the technosphere’s waste layer provide a powerful reminder that ethical action in the Anthropocene requires both producing less waste and finding new ways to realign metabolism through recycling, for example through construction with recycled materials, which actively transforms mass from the waste layer into mass in the active layer.

2. Human Agency and the Question of Scale

Several authors in the Anthropocene Review’s special issue, Jonathan Donges et al. and Jol Thomson & Sasha Engelmann, raise particular concerns about the technosphere’s relative autonomy from human action and agency. Haff’s rendition of the technosphere may seem to imply that humans have set in motion powerful processes that cannot be steered or reversed, which seems to degrade the “Anthropos” in the Anthropocene, and leave humanity relatively weak and hopeless when it comes to repairing the technosphere, increasing sustainability, and ensuring long-term survival. Haff himself responded to these criticisms by arguing that the technosphere operates on such a large scale that it cannot monitor or control what all its component or constituent parts (including individual human beings) do. This leaves some wiggle room for human agency, creativity, initiative, and change. But the question remains whether this “wiggle room” is enough to compel significant large-scale changes in the function and outcomes of the technosphere.

New York’s dogged refusal to accept its rank as “dirtiest” megacity on Earth thus points broadly to possible strategies for remediating a techno-environmental crisis of planetary proportions. As the expanding technosphere scales up, so must we scale up collective human action to meet these challenges, to steer “Spaceship Earth” away from a crash course.

In sum, the ethical challenges of the technosphere are to think big, to think inclusively, and to imagine collective actions (such as divestment from fossil fuels) that can shut down portions of the technosphere and transform them from “active” into components that can then be recycled, as opposed to unusable waste. To put this in the language of urban metabolism, the challenge is to locate existing undigested materials and invent new ways to digest them without creating new undigested materials. This could mean, for example, shutting down current production of nuclear material, plastic, other toxic materials, and fossil fuels while we figure out what to do with the massive amount of residue that already exists. Here again, the question of scale is important: if the entire technosphere is too massive a beast to wrestle, cities—even megacities—may be a more feasible point of entry for thinking globally while acting locally, in a process of “chipping away” at the technosphere, inching toward zero waste. Cities and their metabolism are central to this project.

8 thoughts on “Cities in the Technosphere”