Soil profile (northern France). Notice the distinct horizons— darkest at top, where it’s most organic rich and—below that— various shades of brown that reflect leaching and accumulation of minerals over the millennia of formation of this soil. All photos by author.

Infrastructure— “the set of fundamental facilities and systems that support the sustainable functionality of households and firms. Serving a country, city, or other area, including the services and facilities necessary for its economy to function.” [Wikipedia]

News reports this past summer recounted the heat waves that plagued even regions typically immune to such extremes, for example—the Pacific Northwest, where highways buckled, power grids failed, and supplies of ice cream ran low. Uncomfortable and perilous, certainly, but roads and bridges, pipelines and utilities pale in importance compared to the ecosystem services provided by Earth’s interconnected bio-geo-chemical systems—what we can call the Natural Infrastructure. And no part of the natural infrastructure system is more essential to life than preservation of Earth’s “Critical Zone”— the layer defined as extending from “the tops of the trees to the bottom of the groundwater” (https://czo-archive.criticalzone.org/national/research/the-critical-zone-1national/)—the part that contains and sustains Earth’s biosphere. In current news cycles, the atmosphere attracts the bulk of our attention, so I will parse this envelope further—and artificially so—by homing in on soil, a critical component of the Critical Zone.

The drab-greenish color accentuates a root trace in an otherwise oxidized (red-brown) fossil soil (paleosol) near the Wichita Mountains, Oklahoma.

In simple terms you can think of a soil as a mix of mineral and organic matter on Earth’s surface, that can host land plants (https://www.nrcs.usda.gov/wps/portal/nrcs/detail/soils/edu/?cid=nrcs142p2_054280). And although we commonly think of soils in mostly modern terms, as a geologist, I encounter soils primarily in the rock record, as fossil soils—or “paleosols.” Ergo, for the purposes of geology, I commonly define a soil as a stable land surface. To recognize these in the deep-time record, we look for signs of that stability, such as evidence for colonization by plants (root traces). But stable land surfaces existed even before vascular land plants colonized Earth several hundreds of millions of years ago. The oldest documented paleosols date from nearly 3.5 billion years ago (Retallack, 2018), recognized by evidence for mineral weathering within a discrete (temporal) horizon, as well as “clay skins”—clay coats on mineral grains, or within fractures—a result of having been washed deeper into the soil profile by rainfall water percolating from Earth’s surface to the subsurface.

By virtue of having formed at the interface between the atmosphere and the geosphere, soil formation closely tracks climate. So, e.g., intense leaching of weatherable minerals signals that a soil formed under conditions of extreme rainfall aided by relatively high temperatures that accelerate chemical reactions. This is why we mine tropical soils for aluminum ore, because aluminum resists dissolving into water, and thus accumulates as solid material in intensely leached soils. 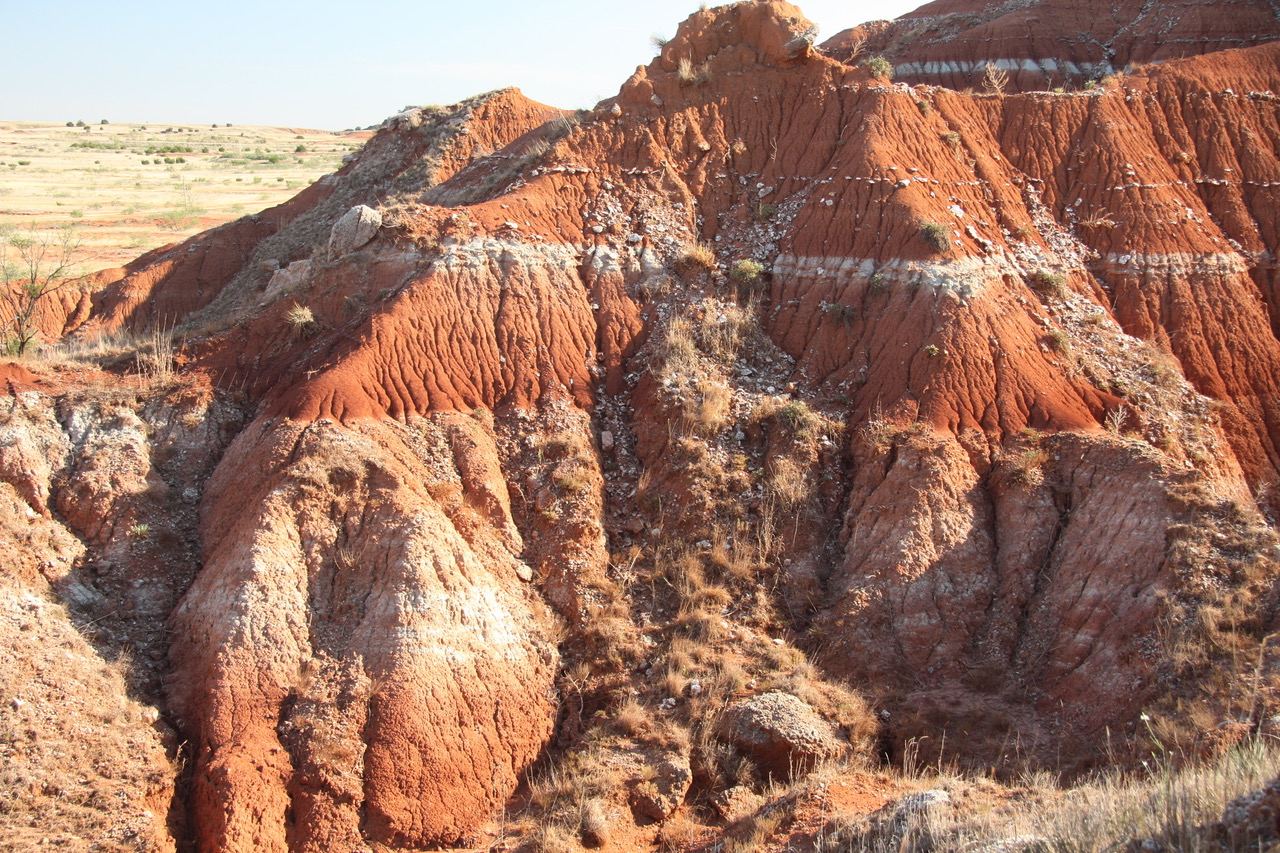 But just as human-engineered infrastructure such as the interstate highway system wasn’t built in a day, soils don’t form overnight, and can be neither manufactured nor mined, despite beliefs erroneously propagated by the convenience of bags of so-called soil available at the local garden store. Well-developed soils that form in situ possess unique physical and chemical characteristics, which our attempts at soil amendments fail to replicate. So, although climate constitutes a key factor in soil formation, time—duration of soil formation— confers an equally critical condition. And thus we once again find ourselves head to head with the cognitive dissonance created by the concept of time as conceived by humans,  compared to time as required by Earth processes. A recent compilation put mean rates of soil formation at 0.053 +/- 0.005 mm/yr (Evans et al., 2020)—in other words, a thickness roughly the width of a human hair annually—indicating that soils require (and record) surface stability on the order of millennia to millions of years.

Soil scientists know this, and FDR encapsulated it when he noted, in the wake of one of the nation’s worst man-made environmental disasters that “the nation that destroys its soil destroys itself.” When settlers used their plows to bust the sod of the Plains to plant wheat, they set the stage for the wind to deflate millennia of soil genesis in mere months. Agriculture relied on the formation of the vital ecosystem service of soil formation, and that free gift was essentially squandered.

And so, in real (human) time we continue as rates of anthropogenic soil erosion far outstrip those of soil formation—by more than ten fold (Montgomery, 2007), implying that we face the eventual extinction of soil (Amundsen et al., 2003). Evans et al.’s (2020) more recent compilation noted that about a third of global soils are projected to last no more than two centuries.

I could end this essay here, and leave the reader—once again—sprawled in the depths of despair regarding the sustainability of the biosphere. But let’s instead examine another aspect of soils that could help save our collective asses, in more ways than one.

In addition to weathered minerals, soils harbor organic matter—which becomes stabilized within soil minerals as bacteria, fungi, and animals consume it for energy. As soil organisms process this organic matter, it transitions from labile (easily accessible by organisms) to recalcitrant (less bioavailable and thus more long-lived in the critical zone), with Brobdingnagian amounts sequestered in the latter. Indeed, the sum of the carbon contained in all plant and animal life, plus all the carbon in the atmosphere still falls short of the amount of carbon stored in soils.

To conceptualize this, consider the origin of coal. Coal began as peat—dead plant life that accumulated as organic-rich soil under conditions that largely precluded organic decay. When we mine coal, we mine fossilized soil carbon. 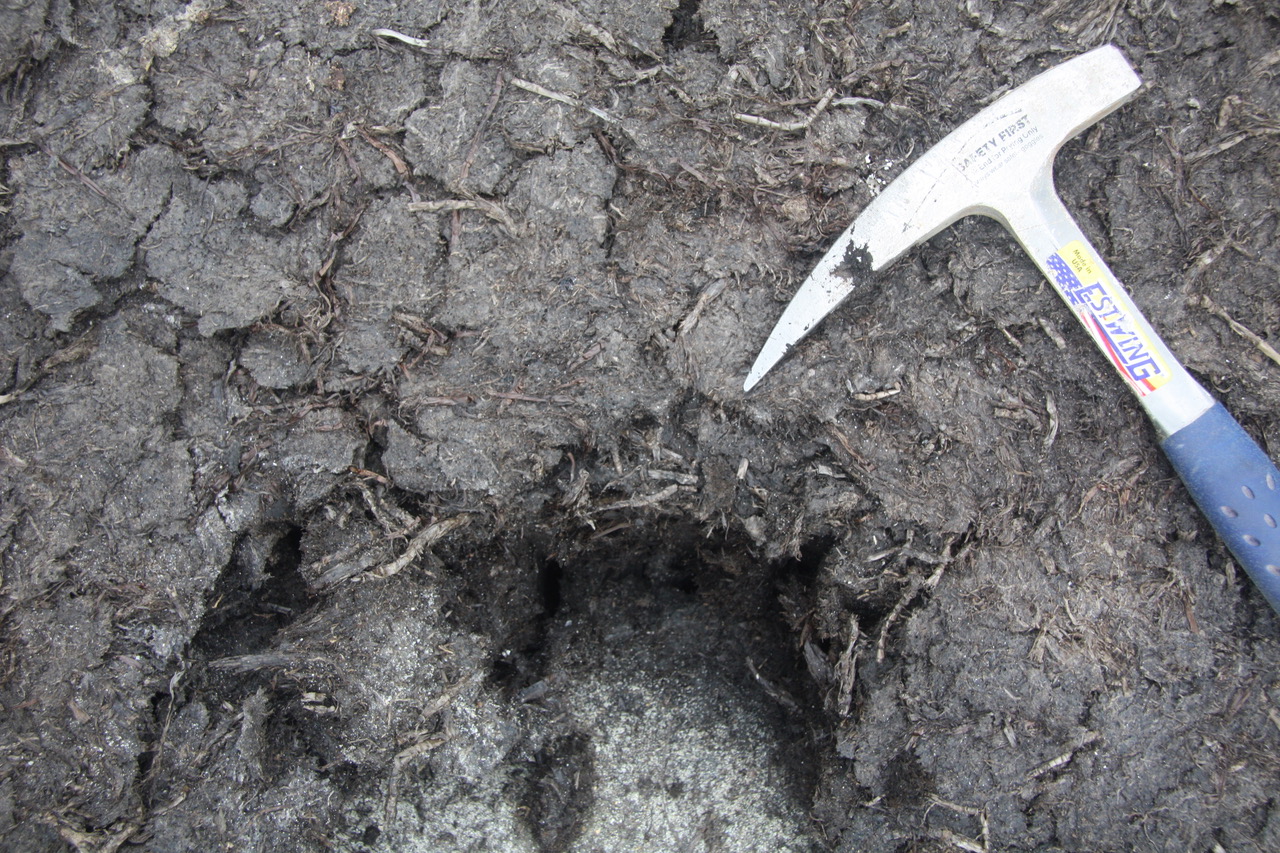 Carbon rich soil in Norway — essentially peat that would ultimately turn into coal if buried and cooked.

The realization of how much carbon lies stored in soil could be either alarming, or energizing. Alarming if soils continue to be tilled, eroded and otherwise disrespected in ways that promote release of all that stored carbon to the atmosphere. But energizing—if we use this knowledge to enact massive changes in our approaches to farming and general soil stewardship. Widespread adoption of regenerative agricultural practices such as cover-cropping and no-till achieves two aims—sequestering carbon and substantially lengthening soil lifespans.

And yes, keep your composting going—or start if you aren’t—because that stuff is redolent with organic carbon ready for soil organisms to stabilize. In the days before the widespread availability of soil amendments at big-box retailers, our grandparents and great grands recognized the value of reinvesting and reengaging spent carbon (kitchen, garden, and barnyard scraps, as well as wood chips, leaves, and cardboard—even old dungarees!) full of essential nutrients back into the task of manufacturing fresh food—a process that almost seems to defy the second law of thermodynamics in creating ordered beauty out of chaotic decay. Composting also confers the added advantage of reducing methane in landfills (a product of anaerobic decay of organic matter tossed into the likes of plastic bags).

As part of the biosphere’s critical infrastructure, soils serve not only as the foundation of our food chain, but as a powerful means to sequester atmospheric carbon. So when discussions turn to infrastructure, remember the ecosystem services afforded by a critical component of the Critical Zone. Like enduring love it can be neither bought nor made, and requires significant maturation.

Thank you to my colleague Dr. Caitlin Hodges, for helpful comments on a draft of this contribution.

Gerilyn (Lynn) Soreghan (ORCID: https://orcid.org/0000-0001-6925-5675) is Director of and Eberly Professor in the School of Geosciences, Mewbourne College of Earth and Energy, at the University of Oklahoma.