CITATION:
Marte Qvenild. 2008. Development in Practice Vol. 18, No. 1, pp. 110–16.
ON-LINE AVAILABILITY:
http://www.jstor.org/stable/27751880
ABSTRACT:
News about Norway’s plans to establish a ‘doomsday vault’ for seeds in the permafrost of the Artic archipelago of Svalbard as a back-up for conventional gene banks reached the world press in 2006. The idea of a Global Seed Vault, which today is considered a ‘Noah’s Ark’ for seeds, was previously regarded with suspicion and considered to be unrealistic. In 1989 the Norwegian government offered to construct an international depository for seeds in permafrost, but the initiative was sidelined in the agitated debates between developed and developing countries over access to and control of plant genetic resources. The realisation of the FAO International Treaty on Plant Genetic Resources for Food and Agriculture (2004) resolved some of the most difficult issues and made possible the launching of a new Norwegian initiative to safeguard some of the world’s most important plant genetic resources for the future.

The Svalbard Global Seed Vault has attained an iconic status in discussions about global warming. Indeed, it is occasionally referred to as the doomsday vault in news stories because it was created as a seed vault of last resort in the event of a catastrophe. Construction on the Vault, located in Qvald, Norway, began in 2006, and it was officially opened in February 2008. Built 1,300 kilometers from the North Pole, the conception of the vault was to provide a safe place for seeds, which could be kept frozen there for hundreds of years, and preserve biological diversity on earth in the event of a catastrophe. It was in the news this spring because the permafrost in the area had begun to melt due to the warming climate, which caused flooding in the entrance to the vault and brought into question its long-term sustainability.

It should not be a surprise that the Vault has been referenced on this blog twice recently (Robert Bailey’s interesting discussion of how humans go about preserving and destroying human-made things in our world and Zev Trachtenberg’s most recent post discussing the nature of human prospection, our way of viewing the future). Reading these posts and considering the nature of the Vault, the historian in me wants to know more about the institutional structures that have been created to make something like the Svalbard Vault possible. The short Qvenild article cited here does just this. 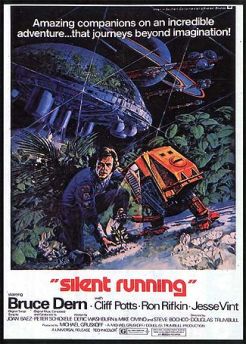 Before I explore the main thrust of Qvenild’s article, I want to step back a moment and consider the cultural meaning of a global gene vault. Thinking about this vault and its complex cultural meaning alluded to by both Tractenberg and Bailey, I am reminded of the movie Silent Running (1972) by Douglas Trumbull, a movie recounting the effort to keep a single remaining forest alive in deep space after all plant life on earth has been exterminated. The main character Freeman Lowell, played sensitively by Bruce Dern, becomes a kind of St. Francis, caring for the forest housed in a gigantic greenhouse dome with the help of three small robots. The plot centers around Lowell’s disregarding orders from the freighter company (American Airlines) which is maintaining several of these greenhouses near Saturn. The company wants to destroy the domes and return the ships to commercial use. Lowell manages to hijack one of the ships and save a single dome, and the movie ends with one of the robots left alone to care for the forest until, perhaps, it is rescued some day in the future.

A similar idea about preserving Earth’s living resources in space became a subplot in the recent film Passengers (2016) by Morten Tyldum and starring Jennifer Lawrence and Chris Pratt. The two main characters have been awakened from hibernation ninety years too soon on a 120-year interstellar trip to a new planetary colony around a distant star. The relevant subplot involves the preservation and transport of plant and animal species along with the human passengers so that the human environment can be recreated when the ship reaches its new planetary home.

Both films ask us to imagine preserving entire ecologies from Earth. The idea is not too different from the mission of the Earth-based Global Seed Vault, albeit in these cases it is through the preservation of dynamic, living, and functioning ecosystems rather than frozen germplasm. What are missing in the techno-romantic visions of these science fiction films and, I would suggest, often in our own conception of gene banks are the actual human institutions that are required to enable them to exist in a complex global economy. So while many viewers will be considering the technological and perhaps ecological challenges depicted in these futuristic stories, I would like to take us into the social context, where we confront some of the most serious difficulties in establishing these long-term global projects. In this respect, the Qvenild article gives us a concise picture of how the Svalbard Vault came to be by operating within the international institutional frameworks that have been created in the last few decades.

Locations of the world’s seed banks in 2009 according to the UN’s FAO.

The Svalbard Global Seed Vault is an extension of the idea of a regional seed bank, of which there are many around the globe. Most of these seed banks (also called gene banks) arose in the 1970s with the express design of preserving the genetic inheritance of a specific geographic region. Although they have never been well funded, local gene banks have been popular; around the world today, there are now about 7.4 million registered accessions. (Gewin 2015)

The seed bank system as it has developed over the last four decades has a number of problems, however. As noted the banks are underfunded; they often lack good management; many are at risk of fire, power outages, or other accidents that would jeopardize the seeds; and especially worrisome, a large number of these seed banks are in areas where there is great political instability. War-torn Syria, for example, is the location of a major seed bank, ICARDA, holding over 25,000 plant accessions. Because this is the region where human agriculture first arose, one would presume that the genetic diversity of this area might be especially important for historical and scientific purposes. (Gewin 2015)

The instability of the regional seed banks system was recognized early on, and by 1990, the Norwegians were proposing to build a secure global storage facility in a cold, geologically strong, and politically stable area of the world. At about this same time, however, the Convention on Biological Diversity was ratified, having been signed by nearly all nations around the world. The Convention protected national plant and animal resources from being exploited by large multinational corporations, but it inadvertently created barriers to building a global seed vault.

In line with the requirements of the Convention, countries could make access agreements with commercial actors and obtain financial benefits from the commercial exploitation of the plant genetic material. An unintended consequence of this system was increased bureaucratic regulations which made it more complicated for scientists to access plant genetic material for research. (Qvenild, 114) 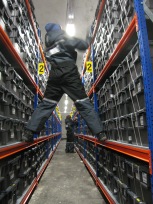 Inside of the Svalbald Global Seed Vault.

This bureaucratic barrier that restricted scientific access was not resolved until the 2007 International Treaty on Plant Genetic Resources for Food and Agriculture, a treaty that “established the necessary mutual trust and created a receptive environment for the promotion of a second Svalbard proposal” (115). It was this treaty, according to Qvenild, that made possible the Svalbard Vault by ensuring that there was some international oversight that would protect individual countries’ interests and still encourage them to participate in global scientific endeavors, like the Svalbard Seed Vault. The story that Qvenild tells about the Vault, in other words, is a story about human-built institutions rather than technological feats or scientific challenges.

Historical relationships follow us through the present and into the future, constraining our actions all along the way. The development of global capitalism over the past several centuries has created a complex network of economic and social relationships and directed and constrained scientific development during that time. The history of projects such as the Svalbard Global Seed Vault are clearly impacted by those structures, for good and for ill. The international legal framework adopted since the end of the Second World War to manage competing interests is now being attacked by right-wing nationalists in this country and abroad. It may be that maintaining strong global institutions, more than dealing with melting permafrost, will pose the greatest challenges ahead for adapting to a warming planet.

Gewin, Virginia. 2015. “Crop Gene Banks Are Preserving the Future of Agriculture. But Who’s Preserving Them?” Ensia. May 21. An overview of gene banks in history with a focus on the Syrian seed bank ICARDA.