Stratigraphy is the science of rock strata; in geological terms, this translates to the science of time. But what IS time? Difficult to define, for certain, but most of us can agree that it marks the passage of events. We experience the passage of seasons resulting from Earth’s annual trip around the Sun, on a tilted axis. We experience the shift from night to day as Earth rotates to face the Sun. We set our calendars and clocks by these celestial events.

Likewise, geologists mark the passage of time in Earth’s history by looking to events that have affected our planet. Two recent Nature pieces engage in an argument about chronology— specifically, the beginning of the Anthropocene. Ellis et al. (2016) argue for an older, and more stepped onset of human influence on the planet, reflecting work in anthropology, archeology, and the social sciences. But Zalasiewicz et al. (2017), representing the Anthropocene Working Group of the International Commission on Stratigraphy, counter with the “Great Acceleration” recent start to the Anthropocene. For stratigraphers—geologists who study rock strata—the argument for this recent—1950s—start for the Anthropocene reflects the stratigraphic requirement (stated by Zalasiewicz et al.) for a discrete, globally recognizable, synchronous and preservable boundary: A time line in the sediment/rock record, traceable globally. The confluence of activities such as nuclear testing and global acceleration in hydrocarbon consumption, both marked by widespread atmospheric effects detectable in the stratigraphic record, fits the bill. When the topic is time, stratigraphers consider gradational boundaries oxymoronic; in choosing planetary events to mark geologic time, stratigraphers are attempting to synchronize their collective watches.

These exchanges regarding the onset of the Anthropocene have caused me to wonder whether, some years hence, future geoscientists will be able to recognize subdivisions within the Anthropocene. In the arcane terminology of geological time, an “epoch” can be subdivided into “ages”; so the natural question is whether there will be an “Age of Trump” which leaves a stratigraphic record, and thus a discernible timeline.

The Trump Presidency, to date, has eschewed science, truth, and facts. But what is truth, and what are facts? The dictionary tells us that a fact is “a thing that is indisputably the case,” and that truth is “the quality or state of being true.” Science is said to seek objective truth. But scientists are annoying. They never prove anything definitively, once and for all time. They operate in terms of hypotheses and theories—ideas constantly subject to tests, and that could fail at any time. How does that constitute a search for objective truth?

Because science is a process. Ideas arise, and scientists test them. According to the influential view of science developed by Sir Karl Popper, scientists subject ideas—hypotheses—to tests designed specifically to falsify them. If the idea passes the test, it becomes stronger. Thus, for Popper, in its most basic essence, science strives to disprove, rather than prove ideas. 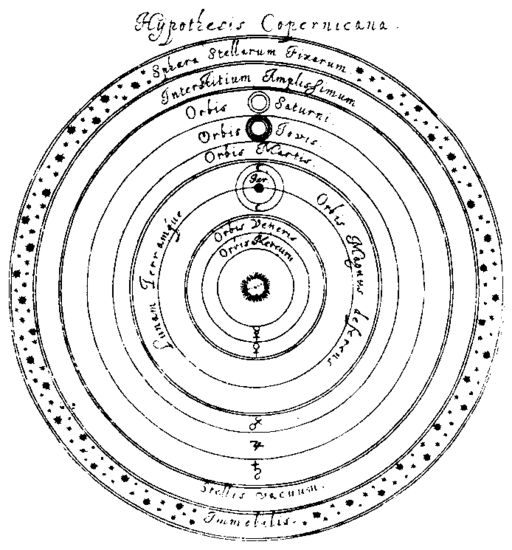 Consider a concrete example: No one has ever actually viewed the Earth orbit the Sun. No video camera has captured this. But the Heliocentric Theory — the idea that Earth orbits the Sun— has withstood innumerable tests. Centuries after Copernicus’ and Galileo’s advocacy of it, the heliocentric model has, for example, informed and thus enabled our flights to the Moon, to Mars, to the outer planets, and now into deep space. Remember, for scientists the word “theory” refers to an idea that has been so rigorously tested that it accounts for all the known facts, and provides explanatory and predictive power. In other words, it becomes, in scientific parlance “true,” even though scientific “truth” remains subject to change if previously unknown facts uncovered by future observations demand it. In Donald Trump’s 70 trips around the Sun, he doesn’t appear to have been impressed by this fact about the scientific process nor any others.

In contrast to the centuries of testing withstood by Heliocentrism, the Theory of Plate Tectonics—the idea that Earth’s crust comprises rigid plates that move, that new crust is created at ocean ridges, and that major geological activities occur primarily at plate boundaries—is a newcomer, batted around now for just over 60 years. Although the earlier idea of continental drift dates to decades earlier, the theory of plate tectonics emerged in the 1950s and 60s, with discoveries of the main mechanism driving plate movement—sea-floor spreading. It works quite well, explaining the means by which the crust can move, predicting the foci of most disruptive geological events such as major earthquakes and volcanoes, as well as the locations of major mountain belts.

The theory of anthropogenic warming of the atmosphere by carbon emissions predates plate tectonics by another 60 years. Since first suggested by Nobel-prizing winning chemist Svante Arrehnius in 1896, this idea has withstood repeated testing for over a century. Yet, Scott Pruitt, newly confirmed head of Trump’s EPA, had the following to say at his confirmation hearing when queried about anthropogenic climate change: “I believe the ability to measure, with precision, the degree of human activity’s impact on the climate is subject to more debate on whether the climate is changing or whether human activity contributes to it.”

This statement betrays a complete ignorance of both the findings of science and the scientific process itself. Scientific observations demonstrate that climate is indeed changing. This surprises no Earth scientist, as the geologic record archives billions of years of climate change. What is more critical is the cause and rate of the change. Observations (e.g. isotopic composition of atmospheric carbon, trends in atmospheric oxygen), as well as modeling finger human carbon emissions as the primary driver for the change. To be clear, science tells us that Earth’s climate is changing, at a pace that outstrips the most rapid climate change archived in the geologic record (see Cui et al., 2011), and we can measure, with precision, the degree of human activity’s impact (e.g., carbon emissions, and resultant temperature increases) on the climate system.

Scientific observations remain perpetually “subject to more debate” because science does not seek to “prove” ideas. Even the idea that Earth orbits the Sun remains subject to debate, because science allows for the possibility that an idea needs adjusting if new observations arise to falsify the old version. Science operates in a manner designed to disprove ideas. Furthermore, one does not “believe” science, because science is not based on belief. It is a means of seeking objective truth about the physical world based on observation, experimentation, and calculation. By contrast, theology is a means of seeking truth based upon faith, which is why we reserve the word “belief” for religious ideas. Truth-seeking by both scientific and theological means remain valid in their respective realms; but just as we cannot seek God with scientific approaches, we cannot seek truth about the physical world using means other than science. One can choose to accept or reject scientific evidence, but belief in the sense of sheer cognitive acceptance has no place here. If one rejects scientific evidence without explaining the errors in the science, then one chooses willful ignorance.

So let’s return to the arcane question of time and stratigraphy. If—centuries hence—all human records are lost, and future stratigraphers must turn to the objectivity of the geological record, will future inhabitants be able to detect the Age of Trump? 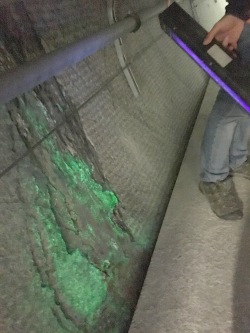 Grimselite (glowing in UV light) on a tunnel wall at the NAGRA test site (Grimsel, Switzerland). Other than lab environments, this mineral has been documented only on tunnel walls. Elements including uranium leach out of the rocks, and grimselite precipitates onto the (human-bored) walls. Photo by Lynn Soreghan.

If willful ignorance overpowers science so completely, then we can only expect an acceleration of anthropogenic effects, manifest in the dust of civilization—in the sediment records of lakes, rivers, shorelines, and ice cores—and perhaps even in a passel of new, anthropogenic minerals formed. Newly published research lists over 200 minerals documented that “occur principally or exclusively as a consequence of human processes” (see Hazen et al., 2017). Naming conventions allow minerals to bear names of a person or a place; for example, the anthropogenic mineral list includes Bobcookite—a hydrous sodium-aluminium-uranium sulfate documented from a Utah mine, and Mikasaite—an iron sulfate from a coal mine in Mikasa City, Japan. Of these anthropogenic minerals, those associated in some manner with coal mines form the largest group. How appropriate would it be to memorialize the architects of the Age of Trump with eponymous minerals such as Trumpite, Pruittite, and Tillersonite?

Given the pace of executive orders and House bills, the Age of Trump is quite likely to be abrupt, globally recognizable, and unique, marked by the increased concentration of heavy metals, radiogenic materials, anthropogenic minerals, and mass extinction. The “Great Acceleration” currently identified as the start of the Anthropocene will be trumped—by a greater acceleration marking the Age of Trump—the age of willful ignorance. It will be great. It will be fantastic. It will be like nothing anyone has ever seen. But consider—superlatives do not always portend a positive outcome. “Fantastic” means “remote from reality.” An ironically suitable descriptor for the Age of Trump.