CITATION:
K. Yusoff, 2019, University of Minnesota Press.
ON-LINE AVAILABILITY:
Page to purchase e-pub.
ABSTRACT:
Kathryn Yusoff examines how the grammar of geology is foundational to establishing the extractive economies of subjective life and the earth under colonialism and slavery. She initiates a transdisciplinary conversation between black feminist theory, geography, and the earth sciences, addressing the politics of the Anthropocene within the context of race, materiality, deep time, and the afterlives of geology.

No geology is neutral. — the final sentence of Kathryn Yusoff’s A Billion Black Anthropocenes or None

I hope we can gaze back on the summer of 2020 and say that an awakening happened— and that it was authentic— that it permeated even the aloof arbiters of scientific discourses. Societal events pushed me personally into reading well beyond my own disciplines— or at least to unrealized edges of it, where I found myself both disturbed and intrigued by A Billion Black Anthropocenes or None by Kathryn Yusoff.

I’m a geoscientist. I “get” the Anthropocene. Or I thought I did. It’s about time, and about the human impact on the planet. We— homo sapiens— are a geological force. We’re changing atmospheric and oceanic chemistries, exceeding planetary boundaries, and catalyzing extinctions.  Articles and blogs and editorials abound about aspects of the Anthropocene, including every post on this blog.

Yes, details remain yet to be sorted, such as nailing the start of the Anthropocene, the placement of the “golden spike” in stratigrapher’s parlance. But beyond that, the concept of humans exerting sufficient force as to create ecosystem disruptions and mass migrations seemed— if deeply disquieting— at least relatively cut and dried.

Then summer 2020 hit, with its horrific reminders that we live in a deeply racist world. And my readings plunged me into areas where I felt uncomfortable, and drawn to disavow myself of formerly revered ideas and figures. Kathryn Yusoff’s A Billion Black Anthropocenes or None engaged me with themes that wove concepts of geology, race, and matter, among others.

Yusoff’s book challenged my idealized vision of geology as a purely scientific quest— an effort, at its most basic level, to read the planet’s history— because, in Yusoff’s words “No geology is neutral.” She argues that, as a science that emerged from the need for resources, geology lies entangled inextricably with notions of conquest. Geology identifies and enables resource extraction, but does so without acknowledging the impacts of this activity on human subjects. “Geology is a hinge that joins indigenous genocide, slavery, and settler colonialism through an indifferent structure of extraction” (p. 107).

Reading it made me disoriented, defensive, deflated. Studying, discovering, naming… imbue the discoverers, the namers, with power.  Yusoff writes “In an act of intrusion, I seek to undermine the givenness of geology as an innocent or natural description of the world, to see its modes of inscription and circulation as a doubling of the notion of property” (p. 10). When geology tells the history of the Earth, it tells the history of a white, colonized Earth. And now white, western scientists have named and advocated for recognition of the Anthropocene, because now even they sense its effects. The realization that even the atmosphere has sustained colonization (Bassey, 2012), rendering planetary systems of sustainability compromised, solidified the arrival of the Anthropocene in the mind of the white, western scientist.

Yusoff argues that “the Anthropocene is not reducible to anthropogenic climate change or to a carbon or capitalist imaginary” (p. 40). Rather it is merely the latest in a long history of traumatized worlds, beginning most recently with that attendant to exploitation of (overwhelmingly) black and brown peoples associated with the resource extractions that enriched western European colonizers. State-sponsored geological inquiry originated as a means to discover, describe, and designate Earth materials for extraction. U.S Army expeditions to begin mapping the U.S. commenced in the 19th century, with the topographical engineers accompanied at times by the Cavalry to “pacify” the native Indians (Thomas and Warren, 2008).  The Geological Exploration of the Fortieth Parallel (1867) was the first to specifically target natural resources across the newly expanded US, and led ultimately to the creation of the U.S. Geological Survey (USGS & Rabbitt, 1975).

The human impact of resource exploitation encapsulates those who served as the tools of extraction— the enslaved and the colonized, yes— as well as the working class— including my white immigrant grandfather who toiled in the Pennsylvanian coal mines prior to his early death from Black Lung disease. Eastern European immigrants were treated as disposable in the company towns of the time, the families denied even death benefits by company doctors who refused to acknowledge silicosis on the death certificates.  But black and brown bodies continue to disproportionately bear the toll of resource extraction, and the environmental destruction attendant with extraction and exploitation (motivating intersectional activism).

And now when geoscientists, who are disproportionately white (Dutt, 2020), sweep into conferences and journal pages to save the day by exposing the severity of our climate crisis, the seriousness of the Anthropocene, and rampant ecosystem destruction, is it laudable or ludricrous? If I were an indigenous person, I might feel as though the concept of the Anthropocene captures the epitome of mansplaining, Exhibit A of a time when the Knowledge-Makers divorced themselves from the Havoc That Knowledge Wreaks. Because— whose Anthropocene? If I were an indigenous person I might be overwhelmed by the hubris associated with a group that deems to label — for all— a time and state of world destruction (see, e.g., Whyte, 2017). 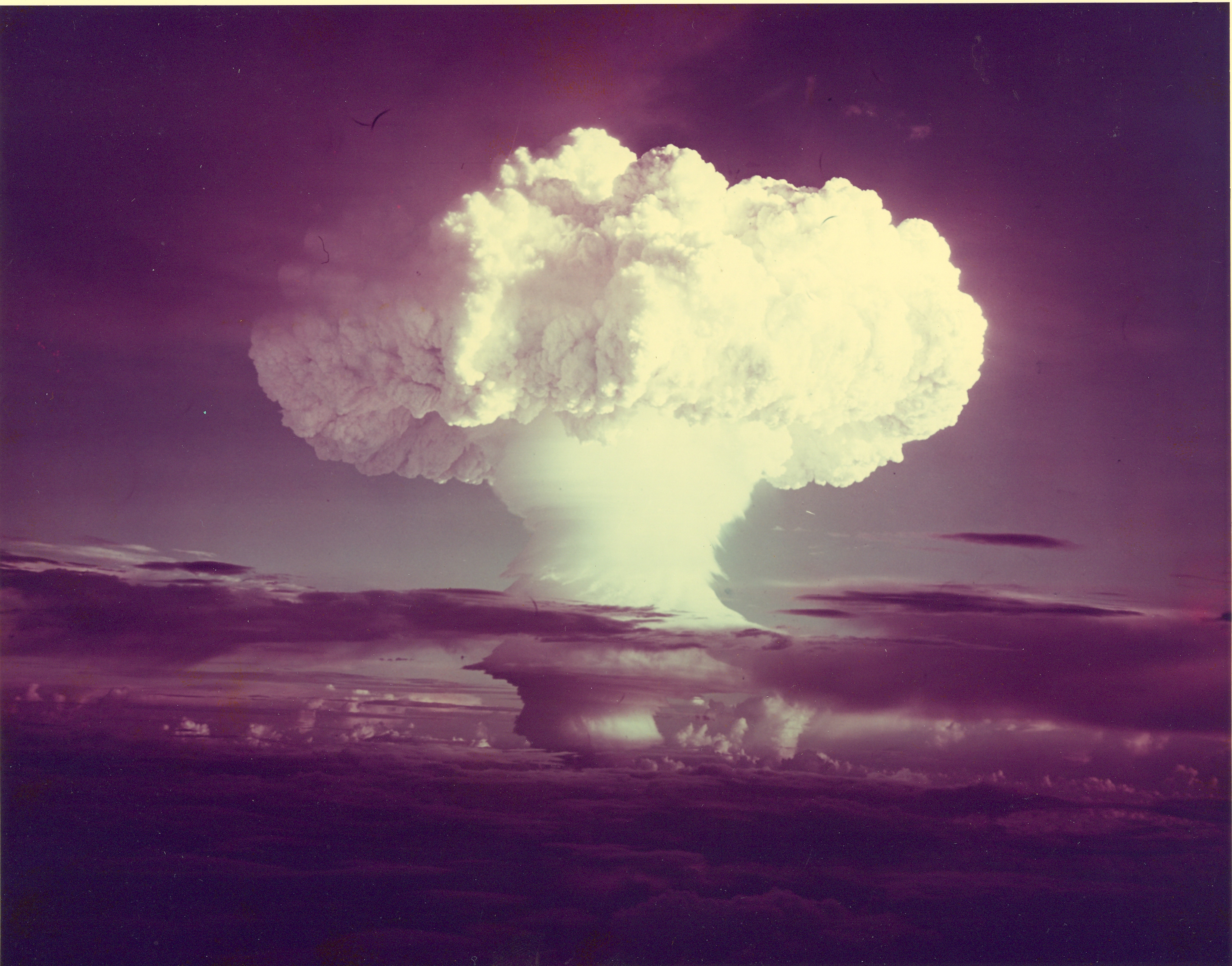 For many peoples, the Anthropocene arrived several generations ago. We recently passed the 75th anniversary of the nuclear annihilations of Hiroshima and Nagasaki. A year later, the Bikini bathing suit was introduced— so tiny as to evoke the diminutive atom itself, and inspired by the eponymous island that sustained the first nuclear tests following WWII.  Sixty-eight years ago, the world’s first hydrogen bomb vaporized Elugelab Atoll, wiping it off the face of the planet. The US conducted 44 weapons tests near Enewetak Atoll, and 23 at Bikini Atoll, ultimately rendering them unfit for human occupation, essentially forever. The Marshallese (Bikini—as well as Elugelab, and Enewetak— are all part of the Marshall Islands) suffered nuclear colonialism; after being displaced, they endured total and essentially eternal destruction of their Home. Subsequent generations will forever grapple with the literal and figurative fallout— the world destruction— of this colonialism. Indeed, so ubiquitous is the fallout from nuclear testing that it serves as a candidate for the “golden spike” marking the start of the Anthropocene.

Yusoff’s Billion Black Anthropocenes calls to mind this multitude of examples of colonialism and attendant resource exploitation, reminding us that the Anthropocene is simply the latest in a centuries-long string of world destructions enacted by western colonizers.

Where in this lies the hope, and — for me as a geoscientist— the redemption of geology? Perhaps in abandoning the reductionist approach of isolating a commodity to study and instead considering the context of the commodity within the larger system of Earth and its inhabitants. In acknowledging our interconnectedness with one another and with all of what Mexican-Chilean climate activist Xiya Bastida calls the sacred elements (rather than resources) of Earth. In recognizing geology’s insights to Earth as a system, an approach long embraced in the indigenous community, and using that power for creation—creation of new spaces, new voices, new worlds—instead of destruction.

I first began this post in summer 2020, but found that—as a geoscientist—I needed considerable time to digest Yusoff’s work. I thank my daughter Emily Soreghan, who also read Yusoff’s work, for many discussions that illuminated the thoughts presented here.

Gerilyn (Lynn) Soreghan (ORCID: https://orcid.org/0000-0001-6925-5675) is Director of and Eberly Professor in the School of Geosciences, Mewbourne College of Earth and Energy, at the University of Oklahoma.

6 thoughts on ““A Billion Black Anthropocenes or None””