Yvette Wiley showing the author how she uses the Strahler Stream Order in her work as the Director of Environmental Services at Iowa Tribe of Oklahoma. Photo by Loren Waters.

In her April 2020 presentation, Tahltan scholar Dr. Candis Callison, takes a close look at how the Anthropocene – as articulated by scientific collectives such as the Anthropocene Working Group – signifies a logic of severed relations that pines for stability in the face of crisis. She highlights how such discursive narratives elide the historical and continuing structural violence of settler colonialism. As an alternative, Callison and her partners in Critical Indigenous Studies theorization (e.g., Davis and Todd 2017) argue the Anthropocene originates out of settler disruption and dispossession. They approach the Anthropocene with a historical and relational framework that instead of asking what do we do, asks how do we relate?

One of the things more visible from this angle of analysis, is how and why many Indigenous peoples are especially hard-pressed to grapple with the vagaries of a changing climate. They are less likely to possess the financial resources to respond to the increased risk of disasters such as sea level rise, drought and severe weather. And as Callison observes in a 2017 essay, their situations and concerns receive far less attention from not only government, but also most media. This sort of settler neglect can make it really hard to see how each different Indigenous community – like many other communities – experiences geographically specific vulnerabilities and navigates them with varying capacities (Cameron 2012). Callison’s and other Native researchers’ concern for responsibilities, reciprocities and relationships also underscores how difficult circumstances do not exclusively define Indigenous peoples. This kind of scholarship encourages us to heed how skillfully and successfully some Indigenous communities are Asserting Native Resilience (Grossman and Parker 2012). 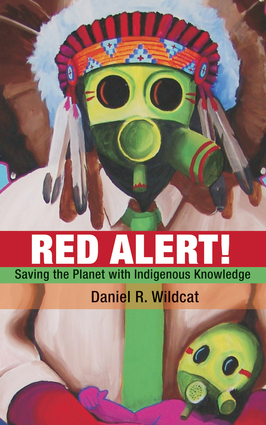 As emphasized in books such as Red Alert! Saving the Planet with Indigenous Knowledge by Daniel Wildcat (Yuchi member of the Muscogee Nation of Oklahoma) and in reports such as UNESCO’s Weathering Uncertainty: Indigenous Knowledge for Assessment and Adaptation, Indigenous lifeways, coping strategies, and knowledge production practices “provide a crucial foundation for community-based adaptation measures” (Nakashima et al. 2012, 6). A striking sixty percent increase in mentions of Indigenous peoples’ placed-based environmental knowledge – commonly called traditional [ecological] knowledge (TK or TEK) – between the IPCC’s Fourth Assessment Report (2007) and the IPCC’s Fifth Assessment Report (2014) suggests the degree to which a growing number of institutions and agencies of various shapes and sizes increasingly share this hope (Ford et al. 2016, 350). President Barack Obama made a similar observation during a Tribal Chairs meeting at the White House in November 2009 when he said, “We have a lot to learn from your nations in order to create the kind of sustainability in our environment that we so desperately need” (cited in Parker and Grossman 2012, 16). Clearly the technoscientific practices of climate science must be transformed in order to learn from – and with – the complexities of Indigenous experiences. But how might this happen without exacerbating the burdens of representation such good intentions already foist upon Indigenous actors (de Leeuw et al. 2013)?

Environmental philosopher Kyle Whyte (Citizen Potawatomi), who has discussed this issue on this blog, provides guidance for moving in a positive direction. He recommends careful consideration of exactly how and by whom TEK gets defined, operationalized, and prioritized. He cautions against a common tendency to treat TEK “as an archive that is continually updated or an archive of a society that no longer exists, yet biologists or ecologists can nonetheless find the knowledge and incorporate it into their research” (Whyte 2013, 3). Approaching TEK as a resource that bureaucrats and scientists can mine for corroborating content and/or theoretical confirmation is absolutely insufficient; it severs Peoples from their practices. Whyte suggests a better approach wherein “TEK is not just an archive, but a part of what members of a particular culture think, believe and do. It is situated knowledge” (3). Lived or witnessed from this angle, instead of an object or tidy category, TEK becomes a processual cultural practice that shapes personal and collective relationships to the features and forces of particular places.

TEK is, therefore, much more than an archive or a singular stewardship practice that one can just “plug and play” into environmental governance or community relations. It is not just a special way of doing things learned through training. Indigenous researchers like Whyte, Callison, and Wildcat foreground another key element in a robust definition of TEK: a commitment to “responsibilities that cannot be detached from the character traits required to fulfill the moral demands of these systems [that sustain life]” (Whyte 2013, 4). TEK embodies a geographically specific spiritual obligation, and its institutional inclusion requires that “the people who participate fully in [TEK] must be at the table equally with non-indigenous scientists and policy makers” (5). Without Indigenous peoples’ full participation, efforts to document and employ Indigenous knowledge and related environmental and cultural practices are inept at best and inevitably insulting.

Whyte argues that instead of an add-on measure, easy answer or quick fix, “TEK must play the role of inviting cross-cultural and cross-situational learning for indigenous and non-indigenous policy makers, natural resource managers, scientists, activists, elders, and youth” (10). Cross-cultural learning about “differences in worldview, language, lifestyle and so on” that can distinguish Indigenous from non-Indigenous communities is absolutely essential, although great care must be taken to prevent the depoliticization of cultural conversations. One way to do this is to stress how related cross-situational “differences in capacities for environmental governance” have mighty consequences. Indigenous people “may have access to fewer financial resources than the neighboring state or province, have limited political control over the entire region where its members live, and have less representation in national decision-making than representatives of the neighboring state or province” (8). The uneven impacts of the current COVID-19 public health crisis illustrate these cross-situational differences in governance all too well (e.g., coronavirus relief funds reaching Native corporations but not Tribal governments).

Growing interest in TEK and associated changes in legal frameworks means that (some) Indigenous peoples are now more often “at the table” (see Abate and Kronk 2013). Thanks to their recently revalued commitments and capabilities, as well as growing technoscientific capacities, “Indigenous peoples can begin to build institutions of environmental governance that are integrated with non-indigenous institutions in ways that benefit indigenous communities and respect the stewardship goals of their worldviews” (Whyte 2013, 8). Working with Native media makers (and many others) to coproduce a 22-minute video examining climate change impacts in Indian Country  (2012-2014) made me more attuned to these sorts of institutional integration. More specifically, it introduced me to the work of Tribal Environmental Professionals (TEPs) in Oklahoma.

TEPs serve Tribal communities by monitoring water and/or air quality, remediating brownfields, managing natural resources, composing funding proposals, and/or overseeing educational outreach. They occupy a relatively recent position in Tribal administrations (see Grijalva 2008). Their labor requires navigating the divergent and heterogeneous terrains of scientific and Tribal communities. For instance, in Oklahoma, TEPs work with entities such as the state’s Department of Environmental Quality, research centers at state universities, and federal science agencies such as the United States Environmental Protection Agency (EPA) and the United States Geological Survey. They also extensively collaborate with each other (e.g., see the Inter-Tribal Environmental Council).

Keen to learn more about – and from – TEPs, I worked with Loren Waters (Cherokee and Kiowa) and Mia Riddle (Choctaw, Creek, and Chickasaw) to coproduce video portraits of two Native women who direct Tribal environmental programs in Oklahoma: Yvette Wiley (Muscogee Creek) and Polly Edwards (Caddo).

Our two short videos (one is 5-minutes and the other is 8-minutes) began with life story interviews that Waters skillfully conducted with Wiley and Edwards. And they would not have been possible without Riddle’s professional media making magic. We made these video portraits in hopes they prove useful in all kinds of classrooms where they might inspire students, especially Native youth, to pursue an environmental education that well positions them – culturally, politically, scientifically, spiritually, and/or creatively – to serve their communities as well. Kindly share them as you see fit, and please do let us know if you have suggestions for their integration/mobilization and/or a desire to work together to coproduce more video portraits of TEPs that allow them to narrate their own educational pathways, professional responsibilities, and personal commitments in the ways they think might motivate others.

Laurel Smith is an associate professor in the Department of Geography and Environmental Sustainability at the University of Oklahoma.