Ubiquitous plastic in the environment is a hallmark of the Anthropocene (Waters et al. 2016). Wildlife routinely ingest, becoming entangled in, and are impaired by plastic pollution, creating a pressing global problem (e.g., Vegter et al. 2014). While undoubtedly an environmental crisis, these acute impacts are not my focus. I am interested in a more subtle phenomenon: the effect of plastics in the environment on animal behavior and communication. How, I wonder, do animals use plastic to signal information and do those uses provide any insight into links between human socio-ecological niche construction and recent evolution of animal behavior?

In 1982 Richard Dawkins challenged the orthodoxy of evolutionary biology by arguing that not only are the physical bodies of organisms the product of selfish genes, but so too are the impacts that those bodies have on the environment they inhabit. Dawkins refers to his idea as the extended phenotype. The genes of humans have extended their phenotype into the environment in ways that are more pervasive and profound than those of any other species, with the possible exception of the genes that enabled cyanobacteria to perform photosynthesis and contaminate the atmosphere with oxygen over 2 billion years ago. Through the lens of the extended phenotype, we can contextualize the evolutionary drive toward (socio-ecological) niche construction in humans as the extreme example of a universal evolutionary process (Laland 2004).

Many animals* collect and organize naturally occurring materials to extend their phenotype; beavers build dams and termites build mounds (Schaedelin and Taborsky 2009). Some organisms synthesize new materials: bees make waxes and honey, spiders and snakes make toxins. Humans far exceed all other organisms both in finding naturally occurring materials (e.g., tungsten mining) to extend their phenotype and in creating new materials. Humans alone routinely and intentionally synthesize new compounds with the intent of extending their phenotype (although most people would not recognize this motivation!). Of all the compounds ever produced by humans, plastics have perhaps done more to extend the human phenotype in the environment than any other. We now live in a world of plastic – as does the rest of life on earth. How is biodiversity responding to the massive discharge of plastics into the environment?

Let’s examine a few cases in which plastics been co-opted by species to extend their own phenotypes. These cases hinge particularly on the color of plastic, which is no accident. One of the main uses of plastics is tied to the ease with which it can be created in any conceivable color. In contrast, nature tends to be gray, brown, and green. Hairston et al. (1960) famously observed, “the world is green”, although some argue that it is brown (Bond 2005). Either way, the predominant color palette encountered in the natural world is restricted to a small part of the visible (human) spectrum. Among wildlife, intense colors are both expensive to produce and involve certain risks (e.g., conspicuousness to predators). Thus, intense colors tend to be rare and are used to signal either status or danger; or to deceive others about status or danger. The key is that these rare colors represent highly specialized means of communicating information. Back in the Holocene, these colors were difficult to acquire or produce from natural compounds, which made this signaling costly. Here in the Anthropocene there are numerous examples where a surfeit of brightly colored plastics has changed the fate of individual organisms. 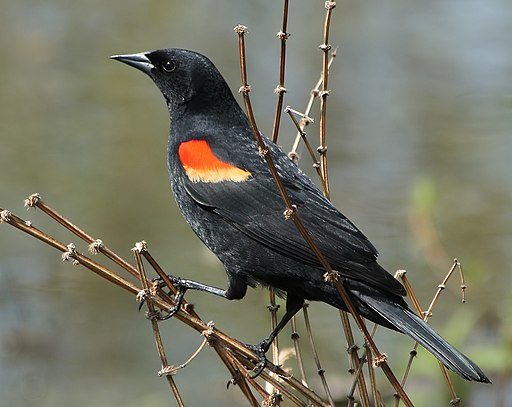 Our first example is actually a human use of plastics that is common in wildlife studies. Ornithologists often mark birds with individual plastic color-band combinations. These bands help researchers identify individuals without needing to recapture them. In the 1990s researchers were investigating the use of the red epaulets on the wings of red-winged blackbirds (Metz and Weatherhead 1991). They found that the amount and intensity of red was an honest signal of the bird’s quality and ability to defend its territory. From there they reasoned that adding red-leg bands to a bird would signal that its quality would be greater than reality; this should be bad for the bird. To test this idea, they placed red leg bands on some red-winged blackbirds and black bands on others. They found that birds that received red bands were more likely to lose their territories and move out of the study area. The mechanism was suggested to be that the bands signaled an increased social dominance (a dishonest badge), which the birds could not sustain. Thus when the red-banded birds were challenged by others, as is the norm in the daily life of territorial birds, they were differentially displaced from their territories. In this case we could say the birds had their phenotype extended for them by the human investigators, but that extension was not defensible. In a similar study on a different species, male bluethroats that were given bands that extended their phenotype spent less time with their mate and more time singing – presumably because they were now more attractive than they had been without the bands (Johnson et al. 1997). This makes me wonder about whether color choices likewise apply to human behaviors with respect to clothing, cars, houses, etc.

A second case study is that of the satin bowerbird. The male (blue, on the right) builds a bower to attract mates; the bower is part of his extended phenotype. In the photo the bower is the gap built into the grass that the female bowerbird (green, on the left) is inspecting. The bower needs to be both meticulously constructed and ornamented with relatively rare blue flowers that must be replaced continuously with fresh supplies. Females often inspect multiple bowers before choosing a mate and males are known to vandalize other’s bowers; competition is fierce. 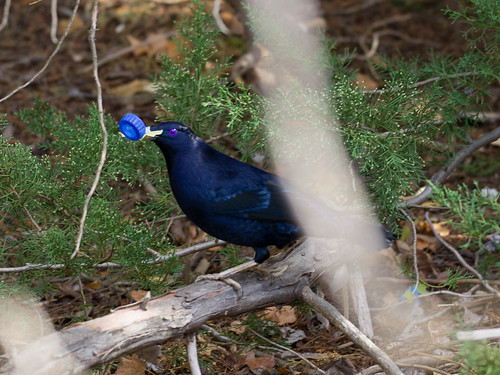 In this age of plastics it is now common to see a male collecting all manner of blue plastic to adorn the bower. Importantly, the colors of these plastics are both more intense and do not fade with time as would flowers. Yet, the plastic almost certainly does not signal the same information as actual flowers. Do the females (and males?) use the presence of blue bottle caps to signal different information than blue flowers? Is the information conveyed by blue plastic still meaningful with respect to quality of the habitat or the male? Or is this an ecological trap in which both the male and the female are fooled into selecting a poor habitat by the presence of blue plastic? For example, fresh flowers might signal something about the quality or phenology (time of season) of the surrounding landscape to a female who is about to lay eggs and raise young. It seems unlikely that a collection of blue plastic would indicate anything about the habitat that would make her more likely to successfully raise her young. It is possible, however, that the primary purpose of the bower is as an arena for male competition and that blue plastic has just replaced blue flowers as a defendable resource to gauge male competition. If this is the case, then blue plastic could serve the same purpose as blue flowers without creating dysfunction. There is evidence that male competition is the real function to which bowerbirds put blue plastic; blue bottle caps are the most popular targets of males raiding the bowers of their neighbors (Wojcieszek et al. 2006).

The example of bowerbirds using blue plastic to extend their phenotype makes me think of the common placement of plastic plants in office buildings and stores. It is usually pretty obvious that these are plastic plants and that maintenance costs are low relative to living indoor plants. Yet, we seem to sense that these plants make these environments more appealing anyway. We probably do not think that the plastic has any function in making these environments better for us (e.g., air quality). However, perhaps our opinion of the owner is improved because of the effort they invested in collecting and arranging the plastic in esthetically appealing ways?

In our last example we look at the nests of Black Kites in Doñana National Park, Spain. These are long-lived birds (~25years) that migrate to Africa in the winter; when they return they reestablish their previous breeding territory. High quality territories are quite limited and must be defended by the nesting birds. Birds that are not old enough or fit enough to defend a territory spend their summer as interlopers (often called floaters) on the lookout for an opening to acquire a territory. Likewise the nesting structures are considerable in size and the breeding pair needs to add fresh material to an existing base year-after-year to keep it fresh (as in the picture). One way that floating birds assess the vulnerability of the territorial pair nest building is by inspecting the new additions to the nest structure in the spring. A fit pair will be killing a lot of prey and leaving their bones and shells in the nest, making it a conspicuous white circle. What better way to demonstrate your vigor than to collect white plastic trash bags to line your nest? These bags are very large and white and require little energy to collect. We seem to face the same question we faced with the bowerbirds, is this just a chance to cheat the system?

In this case we have an answer. Sergio et al (2011) asked that question and found that birds in their prime years decorated their nests more, indicating that nest decoration was an honest signal of the fitness of the nesting pair. This pattern remained true even when the researcher offered decorations to pairs of all ages. This is analogous to asking our red-winged blackbirds if they wanted red bands. Only those who can defend the signal choose to take the decorations. So regardless of the availability of signals of high status or aggression these species only make use of them if they help them better signal their true social status. Signals that are not in equilibrium with an individual’s social status do not improve its fitness. Perhaps something to think about when you consider buying that new red sports car!

One thought on “Plastics and Animal Communication in the Anthropocene”