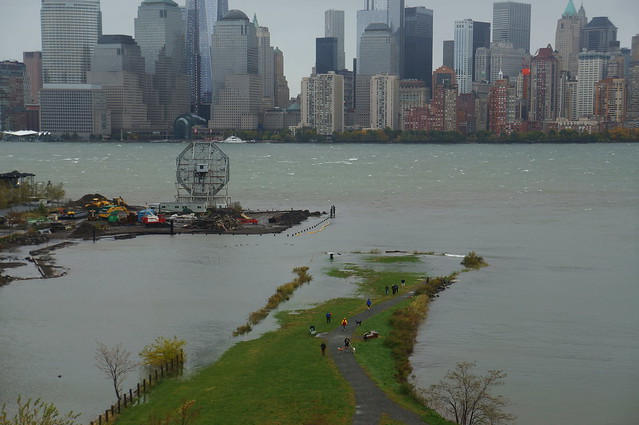 So let’s walk through the answer to the first question I started with.

The question requires that we use the strict geological interpretation of the Anthropocene. Thus, the Anthropocene is a proposed new geological epoch that refers to and records the influence of humans on the geological history of the Earth. The issue of when the Anthropocene began, a contentious issue by itself, is partly relevant to the question that I’m tackling here. This is because the observed acceleration of atmospheric CO2 concentration and the concomitant change in the isotopic signature of C within the atmosphere is consistent with a large number of other anthropogenic acceleration signals emerging at ~1950, which is rapidly becoming the consensus as the Anthropocene start date. But remember that a CO2 concentration by itself is not a climate change event, despite the fact that it portends one. The magnitude of climate change, as we sit at the end of the second decade of the 21st Century, remains relatively small.

Our current climate change is measured principally from three climate parameters. The first is surface air temperature, which as a global average has risen since pre-industrial times by slightly less than 1 degree Celsius, and still rising. The second is surface sea temperature, which has been consistently higher during the past three decades than at any other time since reliable observations began in 1880. And the third is global sea-level, which has been rising since 1993 at a globally averaged rate of ~3.2 mm/y. To be sure, there are other changes in long-term weather patterns that might be related to our current climate change, such as the behavior of northern hemisphere jet streams, the increased frequency and magnitude of storms and heatwaves, all of which are fundamentally related to the changing gradient in energy transfer from equatorial zones to polar regions that in turn is driven by the increasing concentration of CO2 in the atmosphere. I am not about to argue that these changes are insignificant or unimportant. They are significant and they are important. But as things stand right now, the relatively small impacts of modern climate change on the Earth system are trivial in comparison to the various other anthropogenic changes that constitute the Anthropocene.

Constituting the Anthropocene refers to the likelihood that the tangible anthropogenic items (what a geologist will call a signal) will be preserved within a geological material (in this case, a sediment that will in time be transformed to a sedimentary rock). Colin Waters and the Anthropocene Working Group provide one of the most complete lists of Anthropocene items that could provide the geological evidence for the proposed Epoch. These include the new geological materials: made ground (the concrete and foundations of buildings and infrastructure), novel metal alloys, elemental aluminium, plastic as bottles, plastic as nanoparticles, man-made pollutants, cell phones and batteries, automobiles in junk yards, trash in landfills, isotopes produced from the emergence of the nuclear age, and on and on and on. To these we can add the perturbation of traditional geological materials and processes, such as the greatly reduced supply of sediment to the oceans and the human-induced subsidence of major river deltas. Peter Haff argues eloquently that the primary signal of the Anthropocene is the emergence of technosphere, the collection of technologies that humans are dependent on and that dictate our present actions.

One of the most alarming characteristics of the emerging Anthropocene is the current rate of biotic extinctions. In the last 4.6 billion years, we know of only five other times when a greater  percentage of available species has died out in a short time period, short enough to be considered an extinction event. The specific causes of current extinctions remain debated, but it is likely that the principal cause is related to human actions, largely over-hunting, the often-inadvertent introduction of invasive species, and human-made changes to the physical environment.

Let’s return to the second and perhaps more provocative question: if our current climate change was not occurring, or if we could stop it from continuing tomorrow, would the case for the Anthropocene still exist? The answer, I suggest, is yes, because the primary evidence for the Anthropocene is the accumulated and accumulating human artefacts and the human control over our physical and biological environment—not present or even future changes in the climate. Our ability to generate the new geological materials can be put down largely to first the discovery of high-density energy found within fossil fuels and subsequently the innovation that this enabled. The fact that the energy has been derived from fossil fuels is in all likelihood unrelated to the emergence of the Anthropocene. The Anthropocene still needed the social and economic revolutions that have underpinned the rise of a global society that is based on the accumulation of capital and consumerism. Others will know far more than I about the coupling between the availability of high-density energy and our socio-economic system, but I suggest that had that energy been in the form of, for example, nuclear fusion (i.e. clean and relatively infinite) or extensive wind power, the Anthropocene would look very much as it does today. The Anthropocene is the manifestation of and caused by human behaviour, it is not a manifestation of nor caused by climate change.

The danger in conflating climate change with the Anthropocene is that we might come to view (or more insidiously, that we are being led to view) the plight of vulnerable people and nations purely in the context of climate change. Solve climate change and we’ll solve the wicked problems that currently keep the developing world developing (where wicked here is meant in its social science context of a problem that is seemingly intractable, has multiple stakeholders, where solutions inevitably have winners and losers, etc.). This attitude allows us to avoid facing the reality (let alone the liabilities) that many problems in the developing world are down to human behaviours that are related to the resource needs and consumer desires of the developed world. The emergence of the Anthropocene in the developing world is at its most visceral. Urban areas are expanding faster than planning and environmental regulations (or their implementation) can keep up, and the competition to be a player in a globally connected economy is having disastrous consequences on both the environment and on the vulnerabilities of humans to natural hazards. These are problems related to the Anthropocene, to human behaviours at scales from the individual to institutional and local to global. Undoubtedly, these problems are exacerbated by current climate change, but solving climate change (which we must do!) will not be the panacea we are all hoping for. The Anthropocene may have perils beyond those associated with climate change, which will threaten civilization even if mean temperatures remain stable and the seas don’t rise.

For the IPCC Annual Report 5: https://www.ipcc.ch

6 thoughts on “Climate Change and the Anthropocene”