The historian has rarely lived through the events of past times that he describes. He has not seen them with his own eyes; rather, he describes them on the basis of the documents at hand, whether these are the yellowed leaves of old codices and parchments, or the brown fossil leaves
in the coal shales, or the green leaves of the living plant world.

This quote resonated for me, because it implicitly acknowledges that geologists are historians—Earth historians. No geoscientist has experienced the events they describe—perhaps until now. The maturation of Earth science through the 19th and especially latter 20th centuries transported us to today: the ability to appreciate what we are currently observing, within the context of Earth’s history. We can place today’s atmospheric CO2 levels, for example, within the record of its increase since 1958, its pre-industrial values, its glacial-interglacial cyclings, and even its vicissitudes over the past 500 million years. Moreover, we can link these variations to global climate and biospheric changes, and fathom both the short- and long-term carbon cycles, especially since we have in essence short-circuited this cycle. It is this short-circuiting that has caused us to awaken to the realization that we are living through historic change. I say “historic” because it’s possible that the accelerated change of the moment lies outside of rates of change in Earth history—excepting those accompanying major asteroid impacts.

We study Earth history for the same reasons we study human history: to illuminate our current and future worlds, to place our predicaments in context, and to understand how things came to be as they are. Granted, this can be especially challenging for matters of the Earth, given the great expanses of time archived in Earth history.

It is perhaps no coincidence that arguably the first discovery of major climate change occurred in parallel with the discovery of deep time. James Hutton’s qualitative observations of geologic relationships around his Scottish environs ushered in the concept of deep time in the late 1700’s— nearly 200 years before radio-isotopic dating conferred quantitative confirmation to the antiquity of the planet (Patterson et al., 1955).

By the late 1700’s, and increasingly within the early 1800’s, European scientists speculated on a possible role of ice (glaciers) for a variety of puzzling observations that prevailed across the Scandinavian and Baltic regions, the Alps, and Scotland. A watershed moment arrived in 1837 with Swiss geologist Louis Agassiz’s presentation of a theory of glaciation—a former ice age (Paillard, 2015). 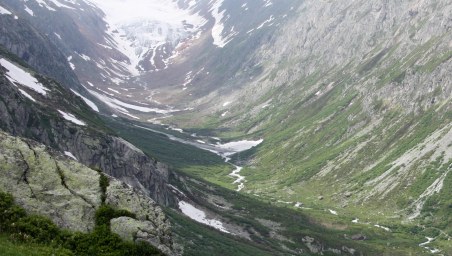 Chenin Glacier, Switzerland. Merely gazing at the U-shaped and hanging valleys of the glacially sculpted Alps transports one into Deep Time.

The evidence lay scattered across the landscape: so-called “erratics”—huge boulders of distant provenance, haphazardly strewn through farmers’ fields as if tossed by giant trolls (an actual folkloric explanation), and beautifully polished and scratched rock surfaces—now known to record the passage of rocks embedded in flowing ice, akin to giant sheets of sandpaper. Such features are now considered quintessential signs of former glaciation.

But the idea of a former Ice Age—by now so well accepted as to form the subject of not one but five feature-length animated movies—was rebuffed by Agassiz’s contemporaries, who preferred explaining features such as erratics by diluvia (catastrophic floods). As is common for “outrageous” hypotheses (Davis, 1926), the glacial hypothesis would require several more decades for the evidence to overwhelm the naysayers.

Eventually, geoscientists realized that the Ice Age(s) recorded planetary change—a spatially extensive phenomenon that affected all the continents—and not limited to high latitudes, but affecting even tropical lakes and the Amazon rainforest. But the ocean record opened our eyes to the temporally extensive nature of the Ice Ages as well; unlike the discontinuous record on land, deep-sea sediment provided a lithologic tape recorder devoid of major gaps. These sediment records shed first light on time and rates, demonstrating the successions of glacial and interglacial intervals, the rates of accumulation and ablation of ice, and, crucially, the asymmetry of these variations, which reflect feedback processes in the Earth system. Understanding the mechanisms behind these [then] unimaginable planetary changes required illuminating timescales.

Probing the reasons for the ice ages led quickly to connections with “carbonic acid” — [really] CO2 (carbonic acid is a different compound, created by rainwater falling through a CO2-infused atmosphere). In his remarkably prescient work proposing a connection between uplift, erosion, drawdown of atmospheric CO2, and consequent global cooling, T.C. Chamberlin (1897) could be said to have ushered in the era of pondering Earth as a system— interconnected, with the carbon cycle at the core of the nexus.

So the appreciation of deep time, deep change, and Earth System thinking emanated from the study of history— Earth history.

But, aside from Earth scientists, most people fail to grasp the perspectives housed in deep time and the implications of current (anthropogenic) activities for humanity’s immediate and longer-term futures. Dipesh Chakabarty (2018) captures this chasm between human-centric and planet-centric history thusly:

Yet in most discussions of the Anthropocene, questions of geological time fall out of view and the time of human world history comes to predominate. This one-sided conversion of Earth-historical time into the time of world history extracts an intellectual price, for if we do not take into account Earth-history processes that outscale our very human sense of time, we do not quite see the depth of the predicament that confronts humans today.

The issue, in other words, is that— as a species— we continue to grapple with scale.

In their post on Coen’s “Floral Archives” chapter, Greene and Hoagland struck on the theme of scale, and how Anton Kerner Von Marilaun effectively bridged scales both temporally and spatially. Coen proposed that “…unlike with rocks and fossils, plants were objects that made climate change visible and palpable.” She noted that Kerner “…grasp[ed] that radical climatic shifts might be a part of the earth’s future as well as its past.”

But outside of such naturalists, humans have been content to keep geological time—seemingly imperceptibly slow—separate from human time. Now, as planetary change accelerates to human dimensions, our “terra firma”—that which imparts a feeling of security, solid ground, an absence of change—is subject to deep change. Chakabarty riffed off of the idea of terra firma in noting

Our everyday thoughts have begun to be oriented—thanks again to the current dissemination of geological terms such as the Anthropocene in public culture—by the geological fact that the Earth that Husserl took for granted as the stable and unshakable ground from which all human thoughts (even Copernican ones) arose actually has always been a fitful and restless entity in its long journey through the depths of geological time. (2018, citing Zalasiewicz and Williams, 2012)

Recognition of the Anthropocene is the recognition that notions of terra firma require revision. 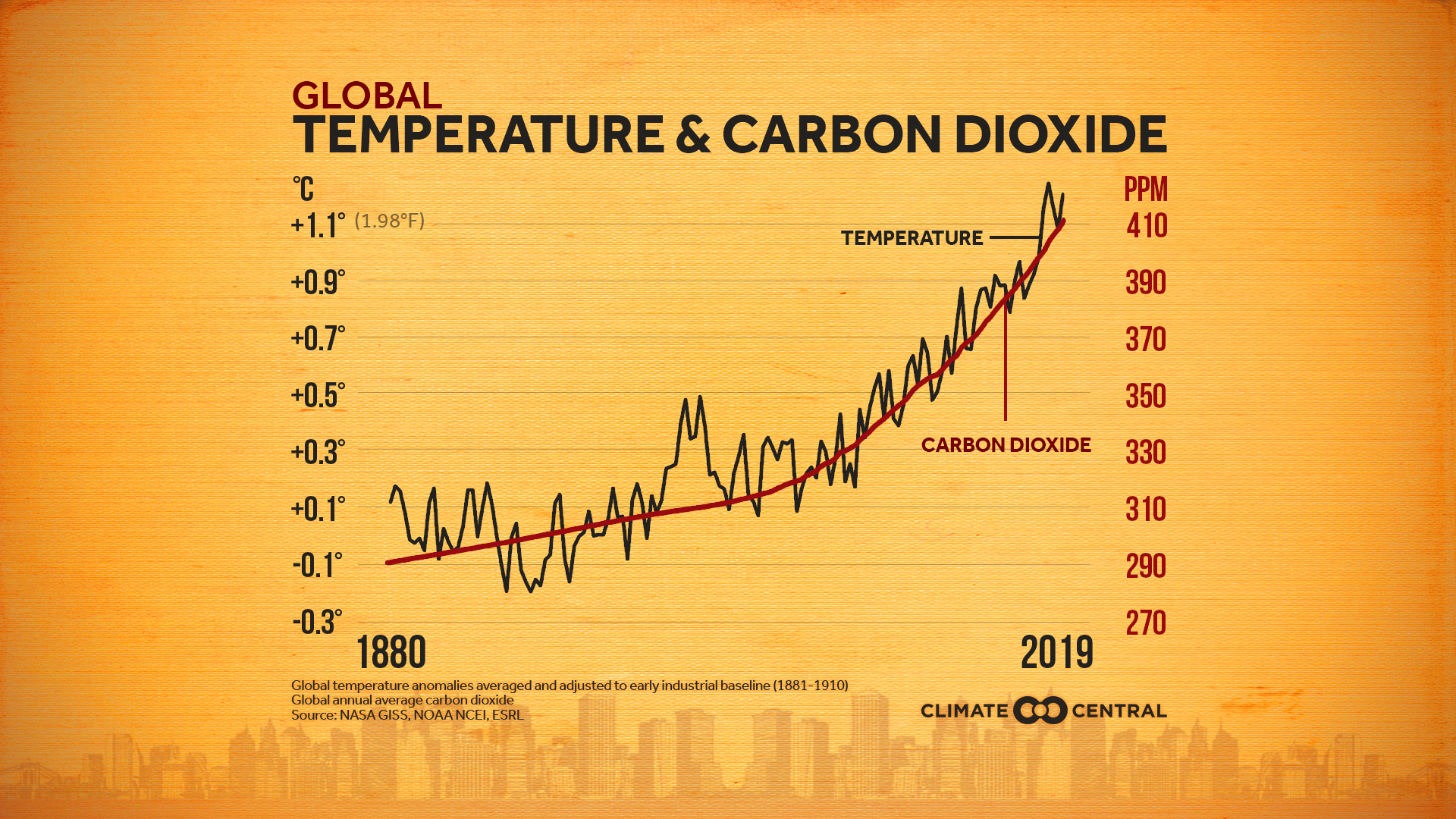 Today’s (March, 2020) atmospheric CO2 value of nearly 415 ppm is 48% higher than pre-industrial interglacial CO2, and by 2100 CO2 will achieve or approach levels (>500 ppm) that, over the last ~400 million years, have characterized so-called “greenhouse” worlds—Earth states devoid of continental ice sheets—states that neither humans nor hominids have ever known.

Putting a name to a phenomenon, or a time—in our case the “Anthropocene”—crystallizes thought. Data and declarations of what might be in store can be frightening, and feed much of the malaise that seems to pervade our contemporary world. The Anthropocene embodies an acknowledgement that change is not only global, but accelerating. It is scale and time that garner attention.

On the other hand, Harry Potter notwithstanding, the path to overcoming fear begins by naming that which one fears.

Even in stories of accelerating time and change, hope abides. As I write, the world faces the COVID-19 pandemic, and initial responses by many governments have been slow. But the imminent threat of a highly contagious and alarmingly lethal virus racing across the globe focuses attention. The accelerating response of world governments to COVID-19 stands in stark contrast to our sluggish response to the problems of the Anthropocene (especially climate change), and the difference involves both scale and novelty. Climate change is no longer novel, and still doesn’t appear as an “imminent” threat to many, or at least to policy-makers.

But there is hope in the mounting global response to accelerating threat. COVID-19 bears some striking similarities to climate change: the threat is global, potentially lethal, and accelerating; all recognize the need to “flatten the curve” to mitigate harm; and there is no silver-bullet cure, but a multitude of ways to prevent the most negative consequences. As articulated in Christof Mauch’s recent essay on “Slow Hope”

…hope has its starting point in fear, in uncertainty, and in crisis… Identifying ways to transcend the craze of consumption, production, travel and extreme workloads in a merry-go-round world can be inspiring and subversive.

The world CAN change on a dime, when the threat is sufficiently imminent. Maintaining Slow Hope might enable us to mount a scaled response.

One thought on “Scaling Deep Time: Encountering the History of Climate Change”