I try not to panic about the Anthropocene.

I have a variety of strategies. First, and probably least helpfully, I take some comfort in knowing that there is uncertainty in the models, so maybe it won’t turn out as badly as people fear. Different, sure—catastrophic, well maybe not. This is not a route to equanimity for anyone who pays attention (e.g. to this). The differences already here are pretty fearsome, let alone what we learn every day it is reasonable to expect.

So I try to be analytical about the fear itself. We can recognize that the Anthropocene has assumed the role of secular Apocalypse, succeeding visions of nuclear winter with anticipation of an over-heated planet facing ecological collapse—a punishment meted out to those who have earned it for their overweening consumption and domination of the Earth—but also, unjustly, to those who have been victimized all along. This recognition might help diffuse the nearly cosmic terror the Anthropocene can inspire. We are set up, culturally and maybe even psychologically, to be afraid in this way. Rising to the meta level should allow us to take some deep breaths, see how the framing contributes to the sense of panic, and re-frame the fear as out of proportion to the (genuine) threat. 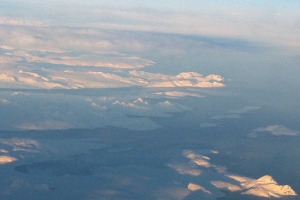 But sometimes I’ll have an “oh shit” moment. One came in November, 2014 as I was returning from, as it happens, the Anthropocene Campus in Berlin. Thanks to a pre-dawn departure my flight passed over Greenland shortly after sunrise. This was the first time I had seen it, and I took a second to realize what I was looking at. That, and the beauty of the snowscape in the early morning light made this an “oh wow” moment to start with.

Oh, so that’s what global warming looks like. In the few minutes I was 35,000 feet over Greenland I got the 35,000 foot view of climate change—which I took to stand for the Anthropocene overall. From what was a single frame I could project a whole movie, like moving the time slider on Google Earth (try it): the release of that much water from ice into the sea, constituting a state-shift in the Earth system.

And I felt like I was actually seeing it. That was why this was an “oh shit” moment: something theoretical gelled into an experience, something experienced as for real. I felt like I was, well, perceiving the Anthropocene, and its presence in my experience also manifested as a sinking feeling: a whiff of the panic against which I try to defend. That affect gave the perception some stakes.

The stakes were complicated by my intense awareness that I was having the experience I was having in an airplane, on long-haul flight. One of the themes of social discussion at the Anthropocene Campus (as at every conference on the environment) was the irony of having people fly in from all over the world to bemoan climate change—note the “fossil” at the lower right of this cartoon. This deepened the “oh shit” feeling. Not only was the phenomenon of global warming right before my eyes, I myself was contributing to it, right at that very moment. 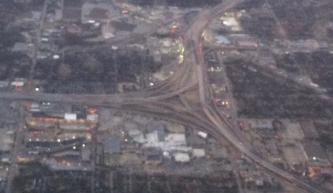 My contribution with that particular flight was only tiny, of course. But everything about air travel makes me think of the planet-girdling system it is part of, and therefore represents. That became even clearer as we approached O’Hare, and I saw the channels in the landscape for the flow of car traffic, intersecting with the flow of air traffic at airports, and likewise part of the larger civilization whose impact I had perceived a few hours before—but, again, which I fully understood myself to be part of. The sight of that impact disclosed the potential for my self-understanding to mature into a feeling of complicity. I finally really got that old line from Pogo.

I may have been predisposed to this cluster of thoughts anyway, but obviously having spent a week at an Anthropocene-themed event had primed me for it pretty strongly. The feeling of complicity is quite available to me, and was highly activated at the conference; the affect might well have made the perception as available as it was. But the affective element here works in conjunction with more purely cognitive elements: the complex of concepts that define the Anthropocene. Having that conceptual framework ready-to-mind provides a ready interpretation for the things we see, structuring our sensory experience into a perception of something beyond the bare visual data. I guess this is how we get access to hyperobjects—though I assume that all perception is reliant on more or less complicated concepts.

One final reflection on my experience. The “oh shit” moment I’ve described brought home to me the issue of moral responsibility: the challenge of being part of a civilization that is (among other things) melting Greenland’s ice sheet. But thinking about it also raised the issue of epistemic responsibility, and how those two forms of responsibility intersect. For the fact is, I really don’t know all that much about glaciers (even after glancing quickly at the Wikipedia article), so I can’t say with much confidence that I actually understood what I was seeing from that airplane window. I have to acknowledge the possibility that instead of perceiving, I was projecting the Anthropocene onto what I saw. My second-hand knowledge about Greenland’s ice melting might have prompted me to imagine that the scene below me was evidence of it.

Here’s where the epistemic responsibility comes in. Just as affect can keep doors closed to perception (as with various forms of denialism), countervailing affect can hold doors open. Affect is an unavoidable constituent in perception, and this is a good thing. But we have a responsibility to work hard to ensure that the inherently interpretative activity of constructing our perceptions balances affect with understanding. If my ignorance of glaciers made me see that ice-scape incorrectly, my experience has a very different meaning—even if, especially if, the melting I projected onto that scene is actually happening. As a matter of responsibility, it is crucial not to do that; responsibility demands the honing of understanding, the informing of experience. This is not a matter of defending against perception, but of striving to have perceptions that are true.

One thought on “Flying Over Greenland”